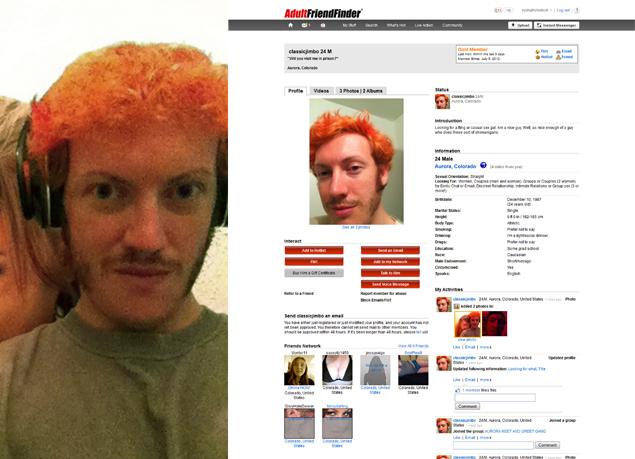 New details are emerging about Colorado massacre suspect James Holmes’ life. Among them, he was not near as smart as some say and he unsuccessfully sought the company of women via adult websites.

With any tragedy such as this, news sources quickly provide us as much information as they can. With James Holmes, the portrayal that surfaced was one of a polite, intelligent, loner who’s friends could never imagine how this happened. However, as time passes, we are seeing a different James Holmes, one who was not quite as intelligent as first reported and one who frequented adult web sites in the hope of female companionship.

Above in the photo, we see the profile of Colorado massacre suspect James Holmes on Adult Friend Finder, a site that reportedly connects adults who are looking for physical encounters. By all reports, James Holmes was not successful in pursuit of women via this site.

Holmes’ profile on the website has reportedly already been taken down but his profile is reportedly real. In a TMZ report, we read of the authenticity of the profile and that the byline on the profile eerily read: “Will you visit me in prison?”

His account was accessed just days before the massacre.

James Holmes: Not The Brilliant Student

While it has been continulously reported that James Holmes was nearly brilliant, new reports are certainly contrasting that report.

Jacobson added that Holmes should not have been accepted into the program in the first place because his grades were not worthy. His erroneous acceptance into the program was based on supposed computer programmings skills he had acquired.

In the end, Jacobson summarized his times with Holmes simply: “My experience with him was quite bad”.

Here is some further reading that you may wish to do about James Holmes and his adult dating escapades:

Colorado Shooter James Holmes — Rejected By 3 Women Before Massacre
James Holmes struck out with three different women on an adult sex website in the days before he shot 70 people in Colorado … TMZ has learned. We broke the story … Holmes was an active member on AdultFriendFinder.com … and now we’ve learned he… (read more)

‘Will you visit me in prison?’ Asks James Holmes on Adult Sex Profile
While an online search for mass-murder suspect James Holmes across the usual social networks such as Facebook and Twitter has come up empty, TMZ is reporting Holmes’s identity on a different kind of social network — AdultFriendFinder. (read more)