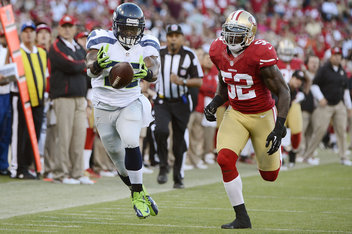 In this article, we’ll take a look at the NFL Playoff Scenarios entering the final week of the season.

Niners and Seahawks are Both in the NFL Playoffs!

We know that that the AFC teams are all set. So, with them, it’s just a matter of who gets what spot.

However, this upcoming final week of the NFL season will be an interesting one for the NFC. With 6 spots available, only 4 teams have clinched a playoff spot: The Falcons, 49ers, Seahawks, and Packers. Of those teams, the Falcons are guaranteed a bye and home field throughout. San Francisco basically blew their shot at the 2nd seed as they got dropped by the Seahawks last night.

In summary, we have 5 teams vying for 2 spots: The Redskins, Cowboys, Giants, Vikings, and Bears.

So, let’s take a look at how each one gets into the playoffs.

How Do the Chicago Bears Make the Playoffs?

To get in the NFL Playoffs, the Bears must win and the Vikings must lose.

How Do the Dallas Cowboys Make the Playoffs?

With a Dallas win against the Redskins, they make the playoffs by capturing the NFC East.

How Do the Minnesota Vikings Make the Playoffs?

Minnesota gets in with a win OR if the all of the following teams lose: Chicago, Dallas, Giants.

How Do the New York Giants Make the Playoffs?

Of all of these teams, the Giants need the largest miracle. For the Giants to make the playoffs, the New York Giants win and all of the following teams must lose: Dallas, Minnesota, and Chicago.

With all of the “Giant” talk that they would be ready “on command”, they clearly were not.

How Do the Washington Redskins Make the Playoffs?

The Redskins will clinch the NFC East with a win.

They will also make the playoffs if both Minnesota and Chicago lose.

It’s going to be an exciting final week of the season.  Though most games don’t matter, the ones that do will elevate week 17 in the NFL as NFL playoffs spots are determined.

Best Game of the Week:  Cowboys vs Redskins!