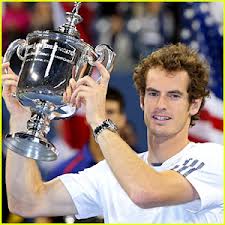 In blustery conditions in the 2012 US Open, Andy Murray won the U.S. Open against Nova Djokovic to earn his first grand slam and reward a nation that has waited over 75 years for a men’s tennis title.

If someone once said “winning isn’t easy”, they  unknowingly were describing Andy’s Murray’s quest to win his first major.  Andy Murray is an amazing tennis player in an era of men’s tennis greatness.  He hit his prime when there were not one–but three–Tiger Woodsish tennis players.

After a bit of bemoaning this fact throughout his career (you could see it, couldn’t you?), he clearly decided that’s not who I want to be.  Fate dealt Andy Murray a very good hand of cards but the other people all had an ace in the hole to beat him when it mattered.  He got tougher.  He sharpened his mental and physical game and it was a pleasure to watch yesterday.

After being up two sets to none, he then lost sets 3 and 4.  This is when the old Andy Murray might have said, “It’s just not destined for me to win these things,” as we have heard Sergio Garcia suggest on the golf course.  Not this time!

Andy Murray stepped up in the 5th set and won it handily, refuting his history, and the history of British tennis in the process.

In the past, when Andy Murray went to that final reserve tank in the majors, he found no fuel.  But preparation, on the mental and physical side of his game, paid off.  When he went to the tank in the 5th set, he found that the last year of hard work had provided a full tank when he needed it.

I loved watching this match.

Andy Murray made a tough decision.  When it seemed that all of the forces of the tennis universe were conspiring against him, he made a decision:  I will change my destiny.

It wasn’t easy and it wasn’t meant to be.

But Andy Murray proved yesterday that, through hard work and a strong will, anything is possible!