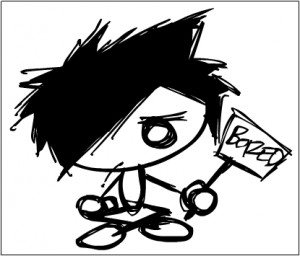 Are you bored or SO bored?

I just found out today that hundreds of people everyday go to Google and type in the term “I’m bored” and they want to be surprised by Google.

I found this out because I was bored and I was wondering what can I do on the internet when I’m bored.  It turns out a lot of people are looking for fun things to do at work when bored and top things to do when bored.

It’s good that bored people have a lot of company; at least they’re not bored and lonely.

But the bored people have it good.  A subset of the “I’m bored” sect trump their counterparts by saying “I’m so bored.”  This should make all the I’m bored people feel a lot better.  They can say, “Well, at least I’m not so bored.”

For instance, right now, this is a stupid article about bored people.  It’s much more fun than writing a witty essay about the election of Donald Trump.

But it is possible that bored people are actually stupid.  I can tell because a whole lot of people try to tell google that they’re bored, but instead they search for this term:  “I’m Board“.   These people are fortunate though because they have one glaring thing that they need to do-learn how to spell.  Now that’s exciting!  If you landed on this page by typing I’m Board into google, here is a link to help you spell better.  I provide you this link because you’ll probably type it into google like this:  Lern How to Cpell.

Did you know that when people want to find out about spell check, many type in spell chack?  Is that ironic?  If you’re really bored, which I know you are because you’re here, you can evaluate whether the lines in the Alanis Morissette song Isn’t it Ironic are in fact ironic.  There are hundreds of websites dedicated to this very topic.  In fact one person was so bored, he re-wrote all the lyrics to make them actually ironic.

This brings up an interesting group of google searchers.  The “I was bored” crowd.  Yes, several people type into google “I was bored.”  What are they doing?  Are they gloating?  Are they looking for other people who got over boredom just like them?

That might even be ironic.  If you’re at the keyboard typing “I was bored”, doesn’t that activity kind of imply that you still are.

This would be a tough audience though.  You’d have to inspire people who get bored so easily.  And, you’d have to talk to them about boredom, which would probably really easily bore them.

Are you still with me?

Other Links and Notes Related to Stuff to Do Online When You’re Bored: