In this this 2022 YouTube TV Review, I will answer pivitol questions like: At $64.99 per month, is YouTube TV still worth it? Is it better than cable? And much more…

Why We Chose YouTube TV in the First Place

As we see on WikiPedia, YouTube TV was founded on February 18th, 2017.

At the time, The Atlantic asked: Could Youtube TV Mean the End of Cable?

For a plethora of reasons, the answer for many of us was…I hope so!

Firstly, the cost of cable TV throughout your house was escalating dramatically. Cable companies were not only charging you for your monthly cable subscription but oftentimes charging more for the cable box and/or the DVR box that came with your subscription.

Most of us had signed up for special deals that lasted about one year and then we were unpleasantly greeted with mammoth bills the first month after the year was up.

Secondly, many of us had embraced the idea of cord-cutting with the ubiquitous availability of the Internet. We now no longer saw the need for cable TV throughout the house and welcomed the idea of entertainment anywhere, anytime.

And when YouTube TV was launched in February of 2017, it seemed to address these issues for us. Take a look at the original YouTube TV launch page.

I was especially sold on the fact that I could watch TV anywhere, with limitless DVR capabilities: On my phone, on my computer, on my tablet, and obviously on my TV, I was very excited to not be constrained by devices or particular schedules in my television viewing. Like Shakira says, Whenever, Wherever — that’s how I wanted my TV and YouTube TV provided it!

But, now it’s 4 years later and at $64.99, YouTube TV is almost double its original price.

Obviously, how much you value YouTube TV and your particular financial situation will probably determine if YouTube TV is still worth it.

Since its launch in 2017, we cannot deny that YouTube TV has gotten much better in its offerings. The service has continued to improve and we have many more channels to choose from.

For me, the evolution of live sports on YouTube TV has increased its value and what I’m willing to pay for the service — YouTube TV now includes the MLB, NBA, and NFL networks.

But at $64.99, does it still beat traditional cable? Or, for that matter, does it beat what you have with Netflix or perhaps Amazon Prime?

Is YouTube TV still a necessary part of your entertainment life?

For most of us, the real decision is do we cancel cable and go with YouTube TV?

There are of course other alternatives for online television like Hulu TV or Sling TV. But I think most of us realize that, even at $64.99, YouTube TV is absolutely the best online television solution — that race has been run and the winner has been declared.

In the email sent by YouTube TV where they inform us of the price hike [see Appendix A below], they share a link with us comparing YouTube TV to the price of Hulu TV and to providers of traditional cable TV services, which they estimate to be $84.11.

That estimate for traditional cable TV services seems to be on the low end.

The Real Price Of Cable TV

There are certainly ways to minimize your cable TV bill by taking advantage of initial offerings and changing services when those offerings end.

But the reality is that only the very astute, tedious consumer will choose that path.

For most of us, when the year promotion expires, we continue with the services that we purchased through that initial plan. Isn’t that why they offer the promotions in the first place?

And what does that cable bill really look like?

Let’s take a look at a typical Spectrum cable services bill in a household with four televisions and a set-top box with each television…which you actually must have to do what you want — watch television on your television!

Here is the summary of a Spectrum monthly bill with the bundled package after the promotion ends. 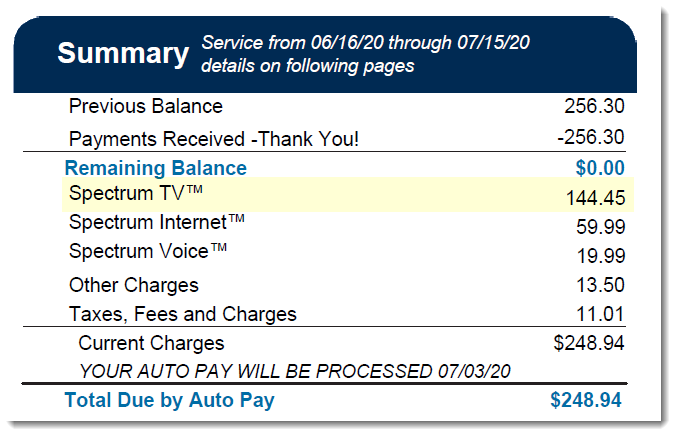 As you can see, the Spectrum TV portion of the bill, which is at its lowest because it’s bundled, is $144.45.

Two things jump out at us as we look at this bill.

First, the exorbitant cost of a set-top box for each TV — this is where Spectrum TV really nails you and it’s an unexpected cost that you never see advertised.

Note: You can use Spectrum TV without a cable box but it’s tedious and involves streaming everything which, if you’re going to do that, you might as well choose YouTube TV as they are the best at streaming.

Second, we see the price of the Spectrum TV Gold package of $112.49 that goes into effect after the promotional rate, which you can read more about here.

Spectrum TV Gold does include many more channels than YouTube TV. At the time of this writing, YouTube TV offers about 85 channels whereas Spectrum TV gold offers in excess of 200 different channels.

At the initial price of $35, YouTube TV was a no-brainer.

With unlimited device usage and limitless DVR capabilities, it was too good to pass up for me.

But at $64.99, you may want to reconsider your situation.

In the scenario above, with four TVs and the requirement of four cable boxes, I think you probably would want to choose YouTube TV.

(Note: In this situation, I would recommend using the YouTube TV app on Chromecast with Google TV — it’s much easier than the app on your Smart TV and the new remote is fantastic, allowing you to speak what shows you want through its built-in microphone).

Because YouTube TV allows six different accounts with three concurrent streams, your one monthly payment of $64.99 can accommodate many people and scenarios without raising the monthly fee.

Whereas with Spectrum TV or another cable TV package, the more TVs you add, the more set-top-boxes you need, and the larger your monthly bill is going to be.

But if you’re just one person with one TV, the standard “select” Spectrum TV offering may be more to your liking. This package includes more than 125 channels compared to YouTube TVs 85+ and the price for the initial 12 months is only $44 (but that will increase to about the same price as YouTube TV).

Plus, in the last few years, cable TV providers have really stepped up their online game. For example, with your Spectrum TV subscription, you can watch online TV through the Spectrum TV app. I don’t believe this is quite as good as YouTube TV but it’s nice to have that availability.

There’s one other big thing to consider which may be a deal-breaker for certain circumstances: Do you have any favorite TV channels that you absolutely must have?

In my circumstances, the answer is yes — I must have the NFL Network, which YouTube TV now offers after their new agreement with the NFL.

So whatever option that you are going to go with, be sure that it has your favorite TV channels.

After viewing the channel list which each offers, and reviewing the information above, you should be able to make the wisest choice between YouTube TV and Cable TV. Or, perhaps you may remain content with just Netflix and/or Amazon Prime?

I’m curious to know: which did you choose? And did the price increase of YouTube TV affect your decision?

Sound off in the comments below!

Personal Note:  As of January 2022, I am still a YouTube TV subscriber — I just love it!

Oftentimes, my visitors just want to know the quick facts.

In this section, I’m answering specific questions that I have been asked about YouTube TV.

Can I use Spectrum TV without a cable box?

You can use Spectrum TV without a cable box but it’s tedious and involves streaming everything which, if you’re going to do that, you might as well choose YouTube TV as they are the best at streaming.

YouTube TV currently supports 85 channels or more depending on your particular local market.

With its availability on nearly every device, unlimited DVR capability, and abundant channel offerings, many people find that YouTube TV is a much better experience than traditional cable.