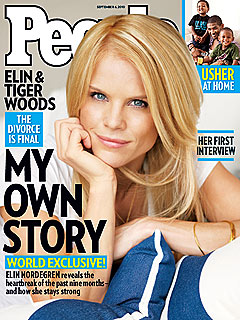 If you can’t get enough of the Tiger Woods affair, read Elin Nordegren’s 19 hour interview with People Magazine online .

Frankly, I am surprised that she gave an interview.  I thought her purported $100 million settlement would preclude her from any types of interviews since Elin had signed a pre-nup that merited less than $20 million.  However, since the initial divorce settlement talk was in the neighborhood of  $700 million, I guess she figured I’m Talkin‘.

It appears that she does not dish on Tiger too much, which is why I would want to read the interview.  I want to know what happened that night he crashed the car.  As I speculated in the initial Tiger Woods Infidelity article, I think she saw a text and absolutely went ballistic, chased him out of the house, and bashed in a car window.  You go girl!

I also think she wanted to work it out thereafter.

You see, the first reported female was Rachel Uchitel.  Aside from having a weird last name, she was pretty hot and Elin probably did what most women do and ask the question:  Am I hotter than she is?  And the answer?  Elin probably concluded that it was too close too tell.

Then, another women comes into the picture, Jamie Grubbs. This is good for Elin because it trivializes the relationship with Tiger and Rachel Uchitel and lets Elin know she just has a semi-horn-dog husband who cheats, but that she is still number one.

Thus, she agrees to Tiger seeking sexual healing in the form of a legitimate doctor and thinks she may still give him a chance.  While Tiger is in therapy, mistresses number 3,4,5,6, and 7 (Kalika Moquin, Jamie Jungers, Mindy Lawton, Cori Rist, Holly Sampson respectively) surface. (See a slideshow Tiger’s Mistresses here.)

Why would she still give him a chance after all of these women? Well, have you read the reports of the women? Though Tiger is mix of Asian and African descent, the girls–the mistresses–clearly tell of a southerly region on Tiger that is more suited to one descent than the other. Plus, their revelations give credence to the idea that he has an insatiable appetite. Further, he’s a billionaire golfer and Elin has two kids with him…so, she has a pretty nice life that got royally screwed up and she intends to fix it!

Then came not the game-changer, but the game-ender! Joshyn James–mistress #8.

“That skank?” Elin yells. “This relationship is over!!!”

You girls know what I am talking about. Joshlyn James is the unforgivable! The girl that, when you think of your husband with her, you think, “I’ll never let him touch me again!” Being with her is like being dipped into boiling vat of the nastiness. If you are ever with Tiger again, you are sure to get proximate infections.

And with that, many of the reasons for being with Tiger again are gone and Elin walks out the door.

Is this what happened? Probably not…but it’s fun to speculate.

If you get Elin Nordegren People Magazine issue, you are unlikely to hear any of this. Sure, you’ll get the “I was deeply hurt” and “I feel much stronger now than ever” Oprah moment quotes, but you won’t get this dish.

Maybe, in the future, we’ll get some of the sorted details. For now, we get a laundered version, and Elin gets $100 million dollars. You go girl.