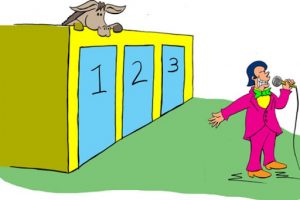 During the movie 21 (read my 21 movie review here), we are introduced to a seemingly simple example of probability often referred to by three different names: Variable change, the Monty Hall Problem, and/or conditional probability.  The scenario is this:

What would you do?

As mentioned, this mathematical scenario is known as The Monty Hall Problem and is an example of the principal of variable change and conditional probability.

My initial thought would be to stick with door #1 as it was the original hunch and the probability is 50/50.

But this is the wrong answer as the probability is not 50/50, which surprised me and has confounded many on the Internet.  As you’ll hear in one of the variable change explained videos below, the narrator states: “It’s an example of math completely contradicting my guy instinct!”

And on the message boards for the movie 21, there are more than 10 pages of discussion regarding this very point.   Also, below you’ll find nearly 100 comments with this theory of variable change heatedly debated (make a comment below yourself if so inclined).

Who says that everyone these days is intellectually apathetic?

Well, we all know at the beginning that the probability that the car is behind the door that we choose is 33.3% or 1/3.

But then, then the host reveals that there is a goat behind door #3 and we have just two choices, which most of us assume have an equal chance of having a car behind them.  But they do not and the graphic below illustrates why.

When you begin, here is what your odds looks like: 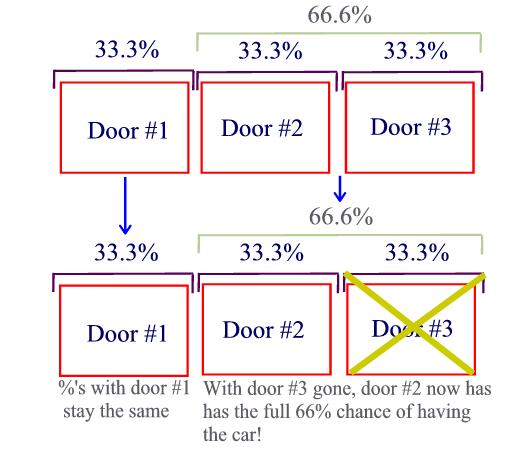 This scenario illustrates the principal of variable change.

Of course, you still might get it wrong, but at least your odds are better.

I’m not a statistician, so if you agree or disagree, feel free to comment and you’ll definitely want to read the comments below, where people engage in lively debate about the nuances of variable change.

Links Related to This Scenario:

Monty Hall Problem:  Read a history of the problem and solution on Wikipedia.

Wednesday Math, Vol. 23: The Monty Hall Problem:  Matty Boy also discusses the issue on his blog after seeing the movie 21.

The Monty Hall Problem:  Discussions from a Mathematics Professor.

Let’s Make a Deal:  Here, you can play a simulation of the game.

Videos: What is Variable Change & the Monty Hall Problem?

In this video, we learn the counter-intuitive answer to The Monty Hall Problem and the concept of variable change.

The variable change dilemma as expressed by Lisa Goldberg, an adjunct professor in the Department of Statistics at University of California, Berkeley.

What do you think of this Monty Hall problem and the theory of variable change? Would you change your initial pick? Chime in with thoughts in the comments section below.