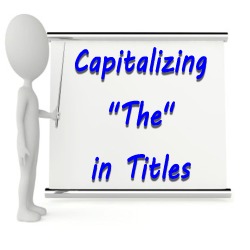 Should the word “The” be capitalized in a title?

I recently received this email from a visitor: “My company has asked me to write several articles and many contain the word ‘the’ in the title. I haven’t studied grammar in years and I can’t remember whether the word The should be capitalized in the title or not. Help!” Thanks, Barb from Sherman Oaks.

The Word “The” In Titles

Ok, Barb, we’ve selected your question today because we have had it many times. So, for all of those who have asked, let’s get straight to “the” issue.

The issue as to whether the word “the” is capitalized can be as simple or complicated as we want to make it.

So, let’s start with the simple explanation.

The word “the” should be capitalized in a title under three circumstances.

Capitalization in Titles: Where Things Get Less Clear…

One of the great things about writing for A Rich Idea is that I get to investigate the little nuances of every question.

And, when many people ask questions like is “the” capitalized in titles, this usually means the issue goes much deeper than the initial question. This is the case with capitalization in titles.

Because there is no standard rule-book about capitalization in titles. At A Rich Idea, we often make a practice of capitalizing every word in our titles. This is correct…if you follow that particular methodology, but some would argue that it is not correct.

The About.com grammar guide on capitalization suggests that there are two main conventions: The Sentence Case and The Title Case.

The Sentence Case stipulates that you should only capitalize the first word and any proper nouns. As the name suggests, these titles look like sentences. Here is their example: “Rules for capitalizing the words in a title“.

I personally do not like this method because it does not effectively distinguish between a sentence and a title.

An example of the Title Case would be as follows: “Rules for Capitalizing the Words in a Title.” In this scenario, you “capitalize the first and last words of the title and all nouns, pronouns, adjectives, verbs, adverbs, and subordinating conjunctions (if, because, as, that, and so on)”.

The Title Case is that which is most often chosen. And, as you can see, the word “the” remains in lower case.

The grammar girl writes about this topic as do the For Dummies folks if you would like to read more about it.

In investigating all of these different approaches, the pervasive thinking is this: Whatever capitalization strategy that you embrace, be consistent in employing it!

I bet you’re not being consistent and, after a quick check, we’re not either 🙂