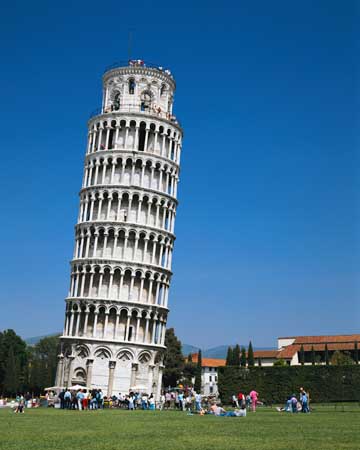 This is a question of great importance as it may someday allow you to answer that final question in Trivial Pursuit and defeat your friend Ernest who has always beaten you.  He’s downright annoying, isn’t he?

Or, you may find yourself on Who Wants to be a Millionaire, and be faced with the final question:  Why Does The Leaning Tower Of Pisa Lean?  You’ve bet it all and cannot go back.  If you miss, you’ll lose almost everything.  Can you just hear the host now (A), “the Tower Leans because of the earthquake in 1721…” The music plays…and you know the answer because you read this article!

Where is the Leaning Tower of Pisa 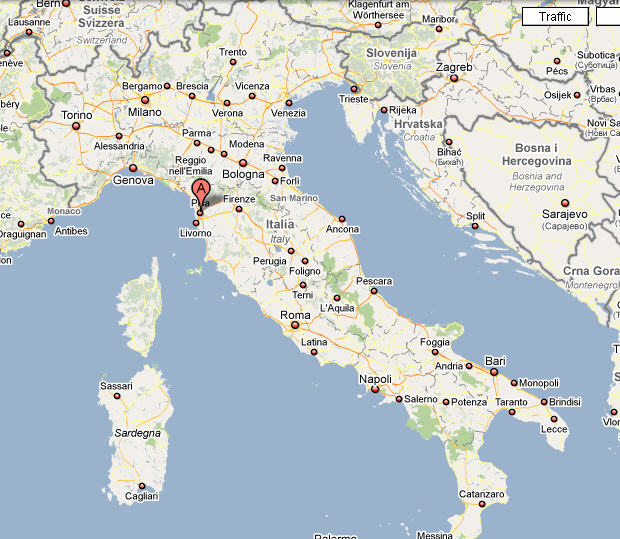 If you guessed Italy, you are right.

Where? Well, it is after all the Leaning Tower of …yes, Pisa. We are smart today!!!

But where in the heck is Pisa? I’ve been to Italy but Pisa was not on my “Let’s Blow Through Europe in 2 Weeks Book“. Perhaps it was because I could not leave the twins I met in Lake Como (what a 9 days that was…leaving me only 2 days to blow through Europe…you wouldn’t have left either…I promise.)

Anyhow, check out the map to your left. Pisa is situated on the west coast of Italy. I could have done the trip from Lake Como in one day were it not for the twins. But why do they have this famous Tower and why does it lean? Ok, I’m getting to that!

What is the Leaning Tower of Pisa

Well, technically, if you want to get technical, the Leaning Tower of Pisa is a “campanile”. Envision an Italian saying that with flair and a cup of Italian espresso and it sounds much better.

This is interesting because most people build their bell tower as part of the Cathedral. Perhaps the Italians, after much red wine, did not know that they could actually add the bell to their Cathedral and thus built a free-standing bell tower. Thus, The Tower of Pisa is a “bell tower” situated next to the Cathedral. (Pisa built a Cathedral because this was “cool” back then and plus, every other town had a cathedral.)

What ‘chu gonna do? You gots to have a Cathedral!”

(direct translation from Georgio on January 8, 1172)

So, Why Does the Leaning Tower of Pisa Lean

Well, Italians have never been known for their precision outside of the bedroom. Of course, they intended for the Tower to stand upright, erect if you will. But, “Cose che succedono”, or “sh*t happens”.

Upon construction of the tower, after some foundation was laid, the Tower of Pisa began to lean to the southeast. This is the most interesting part — the Tower was leaning while it was being built.

Now, I know you think that most architects would cease construction at that point. Looking at each other saying, “hey, we better rethink this, the building is leaning.” That is so un-Italian of you. The Italians said, “Let’s keep this thing going and see what happens.” It only took 177 years to build which is nothing in the big scheme of things, right?

So, what did happen? Though the Tower of Pisa initially leaned to the Southeast, it now leans to the Southwest. Since is resides on bed of poorly laid foundation and loose “substrate” (you’ll enjoy that link–NOT), the lean predictability factor (LPF) is quite difficult to figure out.

Thus, the Italians enjoyed looking at it each day for 100’s of years and asking two questions: (1) Is the Tower still there? (2) If so, which way is it leaning?

An interesting side story about this. In the 1500’s, a gentlemen named Antonio was married to his wife Giulietta. He created a daily ritual whereby he convinced his wife that the Tower would fall any day now. Thus, when they looked out each morning to see the Tower, if it was still standing, Antonio would get to have sex with Giuletta. And, if it was leaning to the Southwest, he would have a nice oral treat that evening. The Tower stood for the length of their marriage. Antonio’s gravestone simply says: “un uomo soddisfatto”. “A satisfied man.”

That’s the question I would ask if I am going to visit. If I am going to be inside the thing, I need to know if it will stay up for the time that I am in it. Yeah, I know, it’s stood for about 900 years, but what if?

If you did not visit Lake Como and meet twins, you might find yourself at the foot of the Leaning Tower of Pisa. In fact, that may be the only reason that you visited Pisa at all, to see its Leaning Tower.

The government of Italy requested some assistance in 1964 (900 years later) to make this thing stay up. However, they mandated that the Leaning Tower of Pisa must stay leaning. Otherwise, they declared, “nobody will visit Pisa.” And they’re probably right…what else do you know about Pisa?

It only took the reconstruction committee, comprised of a mathematicians, engineers, and historians 26 years to come up with a solution. Those on the initial team had a big party when the designs were complete and laughed, “we made a career out of this!” The two Americans in the group, high on Chianti, were heard to say simply, “I love Italy.”

The reconstruction plans called for the closing of the Tower while work was being done. Every building within reach of a potential “falling Tower” was evacuated. The first thing that the reconstruction team did was remove the bells as they caused excessive weight shifts. The bells would eventually be returned because you cannot have a bell tower without any bells. Then, you simply have a leaning tower with no bells and how interesting is that?

In the end, it took 11 years for the reconstruction of the Leaning Tower of Pisa and now the tower is said “to be stable for the next 300 years.”

I’d want my money back!

Why Does The Leaning Tower Of Pisa Lean: Summary

The Leaning Tower of Pisa Leans because it’s built on faulty soil. It shifts as the soil shifts. Though it has stood for 900 years, it has been re-engineered to last for 300 more years.

If you plan to visit the Leaning Tower of Pisa in the year 2300, be careful. Otherwise, visit Pisa to check out…or just stay with the twins in Lake Como and look at pictures of the Tower…and take pictures with the twins!