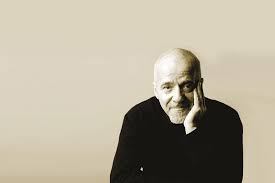 It’s the possibility of having a dream come true that makes life interesting.   Paulo Coelho, The Alchemist

I am seated in South America writing.  Would I be seated here writing Contacting Paulo Coelho were it not for The Alchemist?  Probably, but not certainly.

The effect that one book has on a person is difficult to determine given all the influences in our life.  I do know that the book The Alchemist made a great impression on me.  I always have it near me and often give it to others, who are considering new life possibilities, as a gift.

My friend David always wanted to have a great European adventure.  As he was considering this, I gave him a copy of the Alchemist and he returned the next day and said, “I bought my tickets.”  He quit his job and headed to Europe two weeks later with no other agenda than to live in the moment and be open to all ideas:

Making a decision was only the beginning of things. When someone makes a decision, he is really diving into a strong current that will carry him to places he had never dreamed of when he first made the decision.

Three years later, David now owns a bar in Barcelona, Spain.  Having spoken no Spanish, and never having considered starting a business in his life, David now speaks fluent Spanish and manages a business with 10 employees.  But more importantly, he loves his life because he pursued his passion.

His story did not develop without incident.  One month into his trip, he was lounging beachside on a hammock relaxing and reading The Alchemist.  As he was waiting to check into his hostel, he had everything with him and placed it under the hammock.  He fell asleep.

All was gone when he woke up.  But David, I said in response to his distressed email, “they didn’t get your passport and money did they?”

“Everything.  Except the book, they took everything.”

He lay there in the hammock at a complete loss.  He knew nobody and had nobody to call.  He opened The Alchemist to a part he recollected and read:

Every search begins with beginner’s luck. And every search ends with the victor’s being severely tested.

And this was his first test.  And it was severe.’  Stranded,  in a foreign country where  he did not speak the language, had no nobody to call for help, and, worst of all, no money.

At a certain point, one thinks that things are just not meant to be:  Why is this happening to me?  Are the fates conspiring against me?  Maybe it’s time to pack it in.  I’ve been here for a month now and had many experiences that I treasure.  Perhaps it is time to go back to my normal life back home.

Read part II of this story…