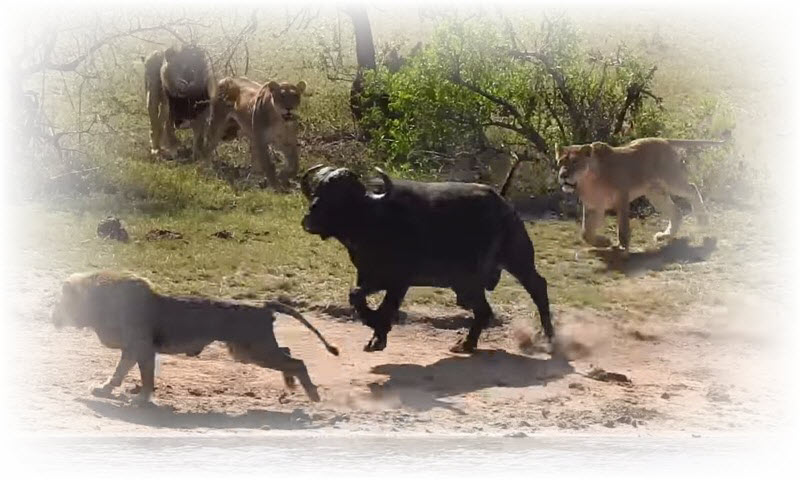 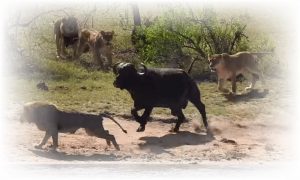 In this must see video, a group of lions attack a buffalo calf, an alligator then bites the calf, and then the buffalo save the calf and scare the lions.

My parents told me about this video on YouTube and I finally found it.  This is truly the best live, wildlife video that I have seen.

This video takes place in Kruger National Park in South Africa.   I have never been on a “safari” because it would be difficult to find a pub.  But, if I ever do, I must put Kruger on the radar after seeing this video.  Here is the full 8 minute video where the lions eat the calf, the alligator also eats the calf, and the buffalo return to attack and intimidate the lions.

Otherwise known as the Battle at Kruger, this video has been viewed over 80 millions times.

I shared the awe of the spectators as I watched the video above. And, clearly, South Africa has their version of Steve Irwin, the Croc Hunter. The tour guide demonstrates all the enthusiasm, awe, animal intellect, and accent that made Steve Irwin such a joy to watch. If you ever visit Kruger National Park, you should make sure that you look him up.

The Calf Survives the Lion Attack

Have you any idea how the calf survived this attack? I know that if I was dined on by 15 lions I would never survive. And, afterward, he was walking. If this calf survives to buffalo-hood, that’s slang for a grown up buffalo, the lions need to look out…he’ll have revenge and a good meal on his mind.

This video has renewed my interest in animal, wildlife videos. Well, truthfully, I never had any interest in Wildlife Videos but now I do. I have been watching a show called “When Animals Attack”. However, in these videos, animals attack humans, which is rather morbid, and I have never fancied myself a morbid sort.

Sometimes though, it cannot be helped, especially when the attacked human brings on said attack out of sheer stupidity. Stay tuned…I’ll try to find some of these videos for you like the women attacked by the bear because she did not follow the sign “stay away from bear cage”.

Anyway, I hope that you enjoyed the lion, calf, buffalo, alligator video above. It is truly the best wildlife video that I have seen and perhaps the best YouTube video of the year.