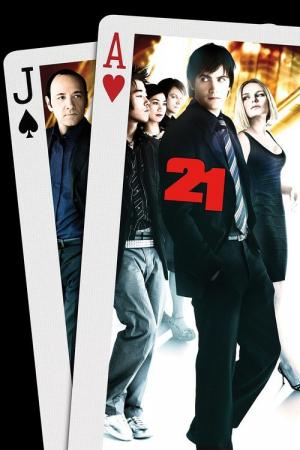 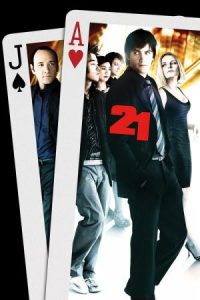 If you’re a fan of gambling (and seeing people bring down the house), you’ll enjoy the movie 21. I certainly did…here is my review of the movie 21!

I was anxious to see the movie 21 as I had read the book Bringing Down the House, the book on which the movie is based.  However, aside from the idea of a bunch of MIT kids taking on Vegas, there are few similarities between the book and the movie.

This movie had little opportunity to fail in my eyes.  As a huge fan and frequenter of Vegas, how can you beat a movie where the premise is taking Vegas for millions?  And the quality actors:  Laurence Fishburne, Kevin Spacey, Kate Bosworth.  But who’s this new kid?  The lead actor?  Jim Sturgess.  I do not recognize him.  Can he pull off the role as the lead character?  I wondered.  We’ll see.

A girl friend of mine is a theatre student in South America.  She pointed out to me the differences in European/Latin movies and American movies.  In European/Latin movies, the lead character is not required to have a metamorphosis; if it’s a movie script where the lead character just goes about their business, leading their daily life, then so be it.  That’s the movie.  This is often why the American audience may find these movies very…dull and depressing.  Look no further than 4 Months, 3 Weeks & 2 Days  for an example of this.

But American movies require the lead character to change, to learn from their mistakes, and find some sort of redemption.  And those people financing the movie usually require this change to be positive.  This way the audience leaves with a smile and their movie makes a lot of money.

And since 21 is an American movie, we begin with our lead character in a predicament.  He does not have the money to pay for Harvard Medical School and he is seeking a full scholarship to pay the $300,000 tuition.  If he does not get the money, he will not be able to attend he tells the jaded scholarship official who responds:  “There are many applicants for this position and, while your credentials are fantastic, so are all the others.  We need someone who stands out.”

This premise required me to suspend disbelief.  Do I live in another world?  If someone gets into Harvard Medical School, can’t they just get a loan that will pay the full tuition of $300,000?  A Harvard Med School graduate will easily earn $300,000 some years after graduation.  I’m sure any bank would be happy to carry his loan.  Ok, I say to myself during the movie, stop thinking about this.

And so we find our lead character needing money, working in a men’s clothing store for $8 per hour (he’s an MIT student, can he not get a better job?-suspend disbelief again!), attending his last days at MIT, working on a science project with his geeky friends, speaking with his wonderful mother, and having distant memories of a father longed passed away.

A perfect setup for redemption?

And redemption begins is his mathematics class taught by none other than Kevin Spacey´s character,  Prof. Micky Rosa.  I love Kevin Spacey and think he’s a tremendous actor.  American Beauty and The Usual Suspects are two of my favorite movies.  Go Kaiser Sose!

His role in this movie was familiar, too familiar.  It was an exact blend of his role as the teacher in Pay it Forward and sales manager in Glengarry Glen Ross:  the omniscient, selfless professor and the greedy, self-full manipulator.

This first interaction between Jim Sturgess, who thus far is carrying his role beautifully, and Kevin Spacey is a great scene.  As the teacher, Micky introduces a seemingly simple scenario of probability called variable change:

A game show host tells a contestant to choose between three doors.  Two doors have a goat behind them…and the other has a brand new car.  He tells Ben to choose a door.  He chooses door #1.  Then, Micky, acting as the host, knowing what is behind each door, reveals what is behind door #3-a goat.  He then asks Ben if he would like to change his choice or stick with door #1.

“Why would you want to do that?” asks Micky.

And Ben says, coolly and emotionless, “because of the principal of variable equations.”

(This seemingly easy scenario leaves many baffled.  Many people reasonably conclude that the chances would be 50/50 either way, but they’re not.  This issue is discussed at great length on the Internet.  Read more about it here.)

This interchange leads Micky to invite Ben into his other world, the world of his BlackJack MIT team, comprised of several characters but the one we’re most interested in is Kate Bosworth’s character, Jill Taylor.

In the end, she entices Ben to join the BlackJack team but he claims that he is “only doing it until he makes the $300,000 to pay for his education.”

This is where the movie becomes a bit cliché, but exciting nonetheless.  Ben of course goes to Vegas, makes a lot of money (which he stupidly keeps above the ceiling tiles in his dorm room-suspend disbelief again!), finds a confidence that he has never had, and gradually dismisses his relationship with his geeky friends as well as the idea of only being in this until he has made his Harvard money.

And then one night Ben makes a big mistake.  He lets his emotions guide his decisions, which is a fundamental error in their gambling system.  Always play emotion-less.  He loses $200,000 and the relationship with Micky is destroyed.

Ben then convinces the team that they do not need Micy.  He doesn’t even play.  They can do it on their own!

But Ben has become a suspected card counter.  This portion of the movie does adhere to the book and we are introduced to Cole Williams, played very well by Laurence Fishburne.  He’s old-school Las Vegas and quickly becoming an anachronism.  His casino security/surveillance company is being taken over by companies that provide computer surveillance with biometric scanning to ferret out casino cheaters.

But Cole does not need a computer.  He can spot casino cheaters because he knows their game; one senses that at one time, he was on their team.  And when he catches you-watch out.  You’re headed for the back-rooms of the casino where you’ll be lucky to escape with only a broken arm.

He of course catches our lead character as he’s trying to do it on his own.  Here, we have a great back-room scene with the two as Cole beats and berates Ben, who leaves the casino looking as if he has just been in the ring with Chuck Lidell.

His world begins to crumble.  He has been kicked off the Blackjack team, Micky is going to give him an incomplete in his class and now he will not be able to graduate from MIT, his money is stolen from his dorm room presumably by Micky, and he has lost his true friends, the geeks.

This is where the cliché’s intensify to a somewhat unbearable degree and the acting of Jim Sturgess becomes forced.  It’s as if he realizes he’s in a cliché and performs these portions of the movie artificially.

He apologizes to everyone, realizes his true self once again, etc, etc, blah, blah.  But he does have revenge on his mind and engages in a plot to bring down the teacher, a plot contrived by Cole, who we find out later had a history with the teacher.

In the end, we are back at the beginning, as too often happens in American movies.  But it works in 21.  Ben is in his final interview for the scholarship, but to get it, he has to stand out from the other numerous applicants.

And, of course, now he has a story to tell, a story that will no doubt earn him the scholarship to Harvard.

Other Notes And Links:

Have you seen the movie 21? What did you think? Leave your review of 21 in the comments below.

If you still haven’t seen the movie 21 and would like to, it’s available here on the Amazon.