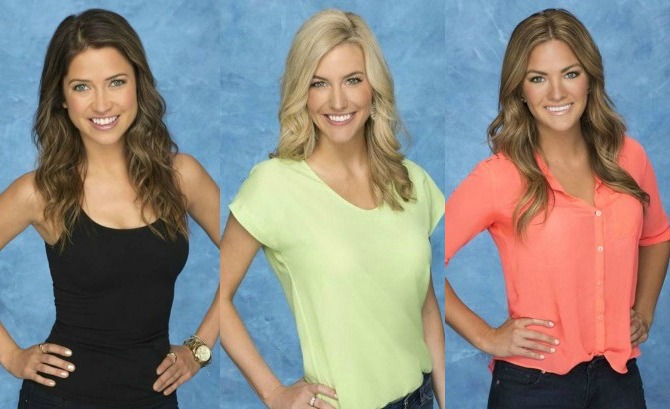 After nearly 4 hours of programming on Sunday and Monday night, the Bachelor Chris Soules is now down to 3 women: Whitney, Becca, and Kaitlyn.

In these four hours, four women were tossed: Megan, Carly, Britt, and Jade.

When you look at all of The Bachelorettes this season, one thing is clear: Chris is making decisions not based on beauty but on a genuine look towards a future and marriage.

Certainly, Britt, Jade, and Megan are sexier than the remaining Whitney, Becca, and Kaitlyn.

With Megan, I am reminded of a saying of a friend of mine who claims long distance relationships don’t work: “What the eye can’t see, the heart can’t feel.” Megan had a great date with Chris but that was way back in the beginning. They had not seen each other much since and she left his heart.

Britt’s departure is the most shocking. After she opened up quite a bit to Chris, he gave the rose to Kaitlyn. Offended that she was not chosen (and she’s clearly accustomed to being the chosen one), Britt unleashed her emotions in-front of Chris and the other girls. Clearly, throughout the show, the chemistry between Britt and Chris was the strongest of all the girls. And, clearly also, she was by far the most beautiful remaining bachelorette.

But, Chris is letting his head and not his hormones do the choosing–an unlikely methodology from a farm boy but you got to give him respect. Similarly, he let Jade go after her revelation that she had posed sans clothing in a men’s magazine.

And Carly? Well, as we learned in the last episode of The Bachelor where Ashley I gets kicked off, the rat never wins. Carly ratted out Britt (unfairly in my estimation) and then got booted right after her. There have also been reports that Carly may be the next Bachelorette but I’m thinking not. She is funny and would be sure to throw down some juicy commentary but she’s not quite sexy enough.

Go with Britt for the next Bacehlorette!

So, of the remaining, who will Chris choose? I’m thinking not Kaitlyn because she’s too…over the top. So, that leaves 2 southern girls: Whitney & Becca. How is Whitney going to maintain the job she loves in Arlington, Iowa? Hmmmm…

So, that leaves Becca, the Virgin. This virgin status thing has made quite the headlines this year and much commentary seems to trend toward the negative. Of that, I’m not sure why. Is a guy going to pick a girl who has slept with many people or a virgin? What do you think?

I am sensing a big problem on the horizon though. Once you take the farmboy off the farm, and introduce him to the world–and the women of the world, can he comfortably live on the farm the rest of his life?