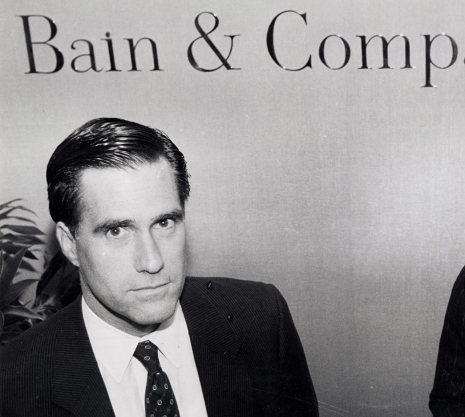 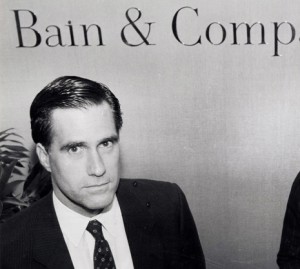 Mitt in his early days at Bain Capital

A large portion of Mitt Romney’s financial success stems from his role as the former leader of Bain Capital. The Obama campaign is using this against him and Mitt is once again back-pedaling, saying that his involvement with the firm ended long ago. As we hear more about Bain Capital, will this be the issue that brings down Mitt Romney’s presidential bid?

What Does Bain Capital Do That Makes It a Target?

To understand why the Obama campaign is latching on to this issue, we need to take a deeper look at Bain Capital and find out exactly what they do that may discourage voters.

Let’s begin with the source. As we look at their website, Bain Capital describes themselves as follows:

Bain Capital is one of the world’s leading private, alternative asset management firms whose affiliates manage approximately $65 billion. Our principals are the largest single investor in each of Bain Capital’s funds, which aligns the interests of the firm with our investors and the long-term objectives of the management teams.

We see not even a pretense of job creation, corporate responsibility, civic duty, product creation, and many more corporate do-gooder adjectives which many companies at least pretend to incorporate.

The one personage who comes to mind when thinking of Bain Capital is Gordon Gekko, the legendary character from Oliver Stone’s Wall Street. Even the man known for “Greed is Good” at least pretended to have altruistic interests.

The Similarities Between Bain Capital and Gordon Gekko

Reasonable people ask reasonable questions and one of them is this: How can these private equity firms make money while laying off thousands of people and bankrupting companies?

To start, let’s just recall the movie Wall Street and what happened. Do you remember how Gordon Gekko was initially going to save Blue Star airlines? He was going to improve the management team and upgrade the fleet with the idea of profits in the future.

But “greed was good” and Gordon concluded that the treasure of the company was not the solid, hard working employees, but, instead, the fleet of salable planes and parts. So, he fires all the people, sells all the parts, pays himself, and declares bankruptcy, removing any necessity to pay pensions and the like.

Result? Gordon makes millions and the employees not only lose their jobs but their pensions.

In some cases, Bain Capital is no different than Gordon Gekko.

Bain Capital & GST Steel: The Gekko’d This One

When we look at the case of GST Steel, Bain Capital certainly pulled a Gordon Gekko.

From the Obama campaign…

“After they bought GST Steel, ‘Mitt Romney and his partners loaded it with debt, closed the Kansas City plant and walked away with a healthy profit, leaving hundreds of employees out of work with their pensions in jeopardy.'”

The Real Truth About Bain Capital

The GST Steel Obama campaign will hit home with Americans, but it does not tell the whole story.

As voters, you need to sift through the propaganda. You can tell one side of the story, without fabrication but with fact elimination, and it presents a devilish portrait of Bain Capital.

But a question needs to be asked about the GST Steel campaign. Was it the original intention of Bain Capital to gut the company?

After doing my due diligence, I think that the answer is no. However, it was an idea from the outset. Gutting the company was “the out” and it was known from the start that this was the fallback plan.

This is the nature of private equity, which John Cassidy writes about in a great piece in the New Yorker:

Private equity is basically a racket. It may be a productive racket, although there is controversy about that. Some studies show that firms and plants taken over by firms like Bain Capital see bigger increases in output per worker than comparable companies that remain independent. But those productivity boosts are largely one-off situations produced by downsizing the labor force, firing people, and outsourcing some of the jobs they do. Sustained increases in productivity and innovation are much harder to find, as so is evidence that the rise of private equity has improved the performance of the economy as a whole, rather than just making a few people like Romney very rich.

Will and Should Mitt Romney’s Bain Capital Experience Factor in the Election?

Mitt Romney has endlessly mentioned his business experience as one of the primary reasons that he should be elected.

Certainly then, his time at Bain Capital, which essentially is the business experience to which he refers, is fair game.

A reasonable person can conclude that Bain Capital is about making money, not about creating jobs. In fact, that is their boast: we’re here to make money. If job creation is a by-product of making money, Bain Capital will gladly do it, but it is not what drives them.

And what of Mitt Romney’s continued involvement after he claims to have left? Well, we all know that he tended to his Bain Capital financial garden after his supposed official departure. HE couldn’t not. Undoubtedly, Mitt manages his money, and recent dis-closings tell us that he manages much of it as it goes overseas into offshore banks.

Gordon Gekko was about greed and making money for himself. If others made money, fine, but that was not the objective. There is nothing with Bain Capital or Mitt Romney that suggests anything other than greed.

I am not saying that this is wrong. Making money is not a crime.

However, do I want someone as my president who has consistently put his well-being ahead of those he serves?