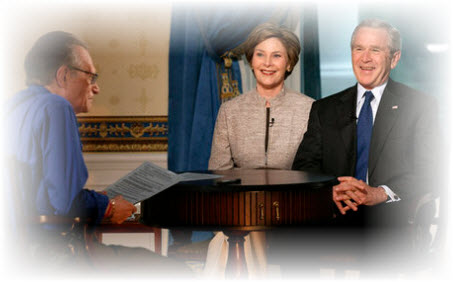 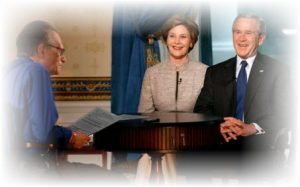 After Al Gore lost the election to George Bush, his demeanor changed as if a weight had been lifted off his shoulders.  He became much more electable after he lost the election.
The same can be said of John McCain in his loss to Barack Obama.  For some reason, he lost his true self during the presidential race and then found himself again after it was over.  Had the real John McCain run against Barack Obama, he might have faired a little better.

I think of these character changes as I just watched a full Larry King interview with George and Laura Bush.

As many of you who have visited these pages before know, I was no great fan of George Bush.  I wrote this Letter to George Bush Before the War leading up to the Iraq war.

As he departs office, his adopted presidential veneer has dissipated.  In the interview below, we see the elected George Bush again.  He speaks candidly of what he was thinking when he had to make tough decisions and what was going on behind the scenes.

It’s an interesting interview that is well worth a full viewing.

The job of any president is not easy.  After 9/11, his task became much more difficult than his predecessors.  In his defense, I will say this.  Post 9/11, his mission became to prevent another attack on US soil.  In fact, I think this is why he was elected to another term in office.

And, in this mission, he succeeded.

Enjoy the interview with Larry King below.  If you voted for George Bush, but are no longer a great fan, you might just be re-introduced to the man you voted for.

After viewing the Larry King Interview with George Bush, I watched George Bush’s final briefing with the press corp (see below).

Again, we see a relaxed man with nothing to prove, nothing to lose, and speaking honestly. There are no awkward misspeaks (well, a couple–a leopard doesn’t completely change his stripes), there is none of that ridiculous, excessive nodding of the head, and there are not the uncomfortable chortles to which we have become accustomed.

There is a lot to be learned in Bush’s final briefing not only about George Bush himself, but about what goes on inside politics and the mountainous challenges of a president.

And perhaps we learn a lesson about ourselves. We should all act as if we have nothing to prove, nothing to lose, and speak forthrightly. In other words, we should always be ourselves and not modify our core for others.

In acting as if we have nothing to lose, we gain quite a lot!