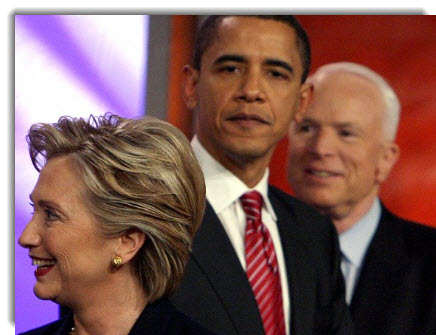 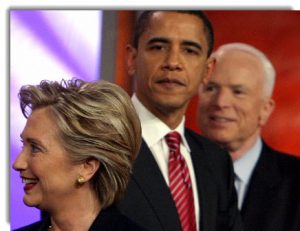 John McCain should not have listened to the advice he received last night:  SMILE!

It was unnatural.  There were moments when it seemed the teleprompter must have parenthetically included:  Smile right NOW and Look At The Camera.  The smile was forced out like a painful delivery and somewhat sinister.

Someone remarked:  “He kind of looks like a pedophile who has just seen a new young girl:  ‘Come here little one’ he, he he”  Ignore this advice John-don’t pause and smile at the camera–it’s not you.

John McCain should not have held his speech in somebody’s den.

Granted, it was a big den, but nonetheless.  Also, why did he just have his family there?

You can’t steal someone’s slogan and use it against them at the same time.

And, then, in the speech, his go-to line was…”That’s Not Change We Can Believe In”.

What should we believe?  It’s time for an original thought from the McCain campaign.

The Error of Big Government:

You can’t claim that Democrats will spend all of our hard-earned money on government programs (that will help people) when you spend (hold on-googletime) $525,395,163,744 and counting all of our money on the war (which kills people).

Why is There So Much Comfort in Defeat

:  For the first time last night, Hillary relaxed and had much more appeal.  I heard several people remark:  “she seems much more feminine tonight”.

I was reminded of Al Gore after he lost his Presidential bid-it was then that people started liking him.  He came out of the political closet. I even, for a moment, thought Hillary’s Hypocrisy had disappeared.  Until I realized that even in defeat, Hillary does not admit defeat.

Hillary is a patriot

…or, should I say, she is like the Patriots.  She was 16-0 going into this election season, with nary a chance to lose.  But lose she did.  And, like the Patriots,  she didn’t really admit defeat after the game:  Something Happened…It was Any Given Sunday, We All Know Who Is the Best…We are the Annointed Ones…What Just Happened???

A Lot of Alliteration

I realized, in watching these speeches, that I don’t use alliteration or rhyme enough when I talk.  Today, when I am asked about how my day was, I will respond as follows (in a deep, prophetic, James Earl Jones tone):

“From the coffee cup to the carport, from the highway to the workday, through the meetings and the mayhem, amidst the traffic and the tension, I mastered and managed each task given to me with the utmost confidence and conviction.”

:  I’ve read speculation on what just happened?  How did Barack steal (ooops–seal) the Democratic nomination when Hillary owned it?

I’ve read two reasons.  (I know…I should read more.)  But, here are the two reasons posited that I recall from last night.

The defining issue, for those that want to know the truth, was that Hillary skin was always to taut…until last night after she knew (but would not admit) that she lost, and became more natural, more Al Gore of-late-ish.  Refer above.

From the Den to Bunker

:  They say we live in the information age.  So, Hillary pondered, “how can I give my not-admit-defeat speech when everyone will know that I have been defeated.”  Lock ém up was the answer.  Put ém all in bunker where their phones, pagers, and portables won’t get (or give) any information.  Great idea!

Where was this strategic mindset during the campaign?

From the Bunker to the Big Leagues:

If John McCain held his speech in his den, and Hillary Clinton in a sealed bunker, Barack Obama’s location was a stadium!  All hail the Rock Star.  His wife even gave him a fist pump.  They’re just cool.

Like Hillary’s reception, Barack fans cheered endlessly before he spoke.  Unlike Hillary’s audience, Barack’s actually knew what was happening in the outside world.

If the national vote was last night, Barack would have beaten John McCain in a landslide and the healine the next day would be something like:  Dynamic defeats Drury!

The only way that Obama will not win is if he gets too comfortable, if he rests on his laurels.

But that won’t happen because he’ll have a constant reminder of that failed approach sitting right next to him in the form a manufactured-blonde Senator from New York, who will be his running mate.

Other Notes and Links on the Political Speeches:

Cheryl Rofer in this Monthly Washington Monthly Post was extremely disappointed with Hillary’s speech last night.  “In hanging on,” she says, Hillary “fuels stereotypes of women…”  Interesting thoughts and worth a read!

Michael Cohen sums up his thoughts in Final Primary Thoughts.   Very good intepreation of last nights activities.  Many of his thoughts seem to mirror my own…and he’s much more studious in his explanation.  🙂

Juan Cole writes an article called The First Web 2.0 President noting that it is not so much about Obama being black as it is about other things, like how he used the Internet with such success in his campaign.  I said to a friend last night that Obama is black “like Tiger Woods.”  Juan mentions this in his article.  Thus, he thinks like a great man…so read him!