On this page, you can view Barack Obama’s State of the Union Speech and see the overall reaction to the speech.

Video: The 2011 State of the Union Address

President Obama delivers the 2011 State of the Union Address.

Reaction to the State of the Union Speech

Poll #1 asked the question, “How would you grade President Obama’s State of the Union address?” As you see in the graphic below, more than 83% of the people gave this speech an A or a B. 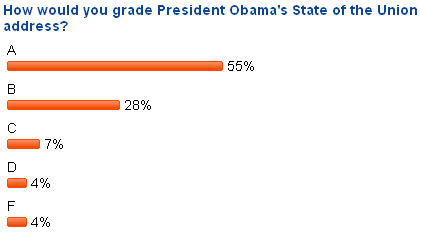 Poll #2 asked the same question in a slightly different way. As you can see below, over 82% of the people graded the speech an A or a B. 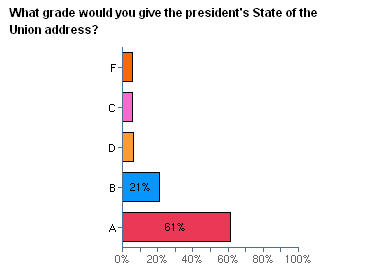 My Reaction to the State of the Union Speech

Over time, I have come to believe that the most important job of any president is to be presidential, inspiring confidence in the citizens that things are good or that things will be good.

It’s based on a simple concept: sometimes a smile precedes happiness.

After Barack Obama was soundly defeated in the November elections, he gave a speech announcing the end of a bad war and this interview to 60 minutes in which he looked like a defeated man…unpresidential and uninspiring. In fact, in the 60 minutes interview, he basically admitted as much–that he had handled some matters in an unpresidential way and vowed to change this.

I think we saw this change last night in the State of the Union Speech.