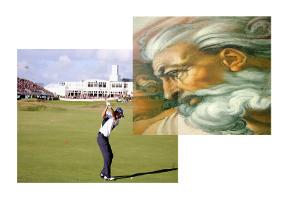 Yesterday, I did not go to church because I was watching the PGA Golf tournament.  One of the ten commandments says:

I am the LORD your God: you shall not have strange Gods before me!

Was I putting golf before God?  Was golf my strange God?

The PGA is one of only 4 major golf tournaments every year.  This is not only big, it’s major.  Church happens every Sunday.  In fact, the nickname for the PGA is “Glory’s Last Stand” because it is a player’s final chance to win a major for the year.  It has the name “glory” in it.  Does this designation not confer some religion?  There will not be another tournament of this stature until next spring when the The Masters begins.

The request to attend church came from my parents.  I am not certain that I would have made a similar request of myself.  Which got me to thinking…did I just break another commandment?

Honor your father and your mother!

How can I sin so much just sitting on the couch watching golf?  Being a Catholic is rigorous business.

I tried to put my sins aside and watch the golf.  Europeans were dominating the tournament, but there was American hope in the form of a 31-year American golfer named Ben Curtis.  He is everything that America now lacks and needs again:  strong but humble.  He is the Teddy Roosevelt of golf as he “speaks softly and carries a big stick.”  In fact, he might not even skip church to watch the golf tournament.  That’s how good he is.  So, even though I was not at church, I exposed myself to goodness.

Ben led the tournament until he miscued and made a few unfortunate bogeys.

And it happened again…another broken commandment:

You shall not take the name of the LORD your God in vain!

Fortunately, none of these thoughts afflicted me as I was all-consumed by the golf.  It is only in retrospect that I realize my sinful ways.  Is this not the case with most sin?  It allows us to continue the activity and apologize later…like I am now.

After the second Ben Curtis bogey, I realized Ben’s chances were diminishing.  This called for a break, an outdoor smoke break.

What a gorgeous sunny day!  As the sun’s rays shined down, a vision appeared before me in the form of a woman wearing a golf outfit.  What symmetry!  Nothing is sexier than a hot women in a golf outfit.  You golfers know of what I speak.  It was my old neighbor’s wife, who is not old.  In fact, at 28, she is 30 years his junior-more my age than his.  They had just returned from a round of golf.

“Would you happen to have some extra buns?”  she asked.  In my head, I heard Do you mind if I show you my buns?

“You know,” she replied, “…like for hamburgers.”  I laughed inwardly thinking that her 58 year-old husband was married to someone who says “like” all the time.  I bet he liked it in the beginning and, like right now, it drives him crazy.

When I returned with her buns, her husband appeared crating something behind her:  A New Samsung 57″ LCD HDTV, the perfect TV for watching the end of Glory’s Last Shot.

With her buns now somewhat off my mind, and the golf tournament in the rearview mirror, I now realize two gross Catholic infractions committed while taking a short smoke break in the midst of watching golf:

You shall not covet your neighbor’s wife!

You shall not covet your neighbor’s goods!

And of course, directly above these two, a third infraction becomes glaringly obvious:

That is six broken commandments in one day all because I wanted to watch a little golf.  I’ll take solace in the fact that I did not commit adultery (but I thought about so I may be guilty on that one too), I did not steal, and, perhaps most importantly, I did not kill anybody.

As for the remaining commandment, You shall not bear false witness against your neighbor!, I have never really known what that is, but if had to guess, I did that too.

Perhaps, George Carlin was right when he said there should really only be 2 commandments.  We would all feel a lot less guilty!