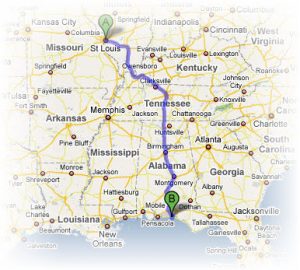 I met her on the beginning of my journey from St. Louis, Missouri to the Florida Panhandle.  My parents, who were riding with me, already seemed to know her.

From the moment she said “hello”, I felt something different, new, a sense that we would be together for awhile.  It was an unfamiliar reaction on my part, but one that felt so comfortable.  We invited her along with us on the car ride.

I looked at her with astonishment.  Can a woman have a look of precision?  If so, she had it.  Her contours revealed perfection and her curves all led to the intended destination.  Her voice was as smooth and silky as your favorite cashmere sweater.  It soothed my mood more so than the car stereo, which seemed to fade into oblivion in the face of her impeccable utterances.

Occasionally, when she spoke, she paused, almost like a young child thinking of what to say next.  It was cute the way she did this like she was waiting for inspiration from an outside source.   The pause was worth it, as it always led to her saying just the right thing.

But this is how it is in new relationships.  Isn’t it?  Everything the other says comes out exactly right.

Disagreements did occur.  Men and women often experience discord when they disagree.  With her, I disagreed several times and waited for the inevitable backlash-the We Need To Talk expression.  .  Why don’t we see eye to eye?  Why must we disagree?

With her, there was none of that.

She met discord with easy adjustment.  And she always agreed with me.  She would reconsider, or as she liked to say, she would recalculate her way of thinking.

Have I met the perfect girl?

Once we agreed, she would take the reigns with the new decision, always steering us in the right direction.

My parents did not always agree with her either.  Perhaps she was too new for them.  When she would say something, they would often disagree or appear disheveled.  Ah, this new generation I could see them thinking.  They would discuss and consult with each other about what she had said, never taking her words at face value.

For some reason, they didn’t completely trust her.

I did though, as I watched her every move and realized that almost all of the time, when she spoke to them, she was right.  Their distrust was always unwarranted.

She was the type of girl who always knew what was coming next.  Her sense of anticipation was uncanny.  If we were talking and not paying attention, she would always remind us of where we needed to be.

“Take a right in ½ mile,” she would say with the confidence of always being right.  How did she do this?  Was she being guided from above?  Her exactitude and logical methods impressed me as they were not typical female characteristics.

She was…she was perfect.

I really think we could have worked out I thought as we reached our destination in the Florida Panhandle.

But when we arrived, she vanished without a word as the car was turned off.

I think I may see her again on the return trip though, as we power up the car, and the GPS comes back to life!