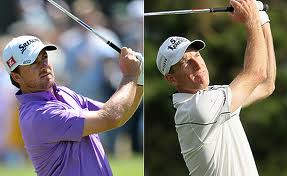 Below were my thoughts going into the final day of the 2012 U.S. Open. In the end, neither of the two headliners I mention below won. It was Webb Simpson who bested them all and took home his first major!

Who will win the U.S. Open today?

Yesterday, before tee-off time, many pundits were already coronating Tiger Woods as the U.S. Open champion of 2012. Then, the unthinkable happened. Tiger faltered.

This leaves the field wide open. There are 17 people within 5 shots of the lead. If one of these early players can post a great score, you have to like their chances. You also have to think that if either Jim Furyk or Graham McDowell, both past U.S. Open champions, can post a score at even par or better, they will win.

If this does not happen, the tournament is clearly up for grabs. There are only 3 people at a score better than +2. If any of them falter, I would say anybody at +7 can shoot a great round and win.

Of course, it will probably be Jim Furyk or Graham McDowell. But, we won’t know until tonight…and that’s what makes sport the most interesting attraction on the planet!