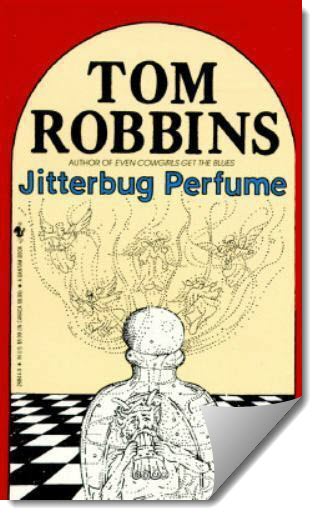 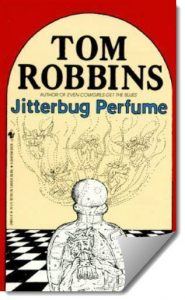 Jitterbug Perfume by Tom Robbins may be one of my favorite books of all time.

Tom Robbins combines profound and playful in perfect proportion.  Also, he teaches you how to live forever.  Two of the remedies are:  lots of sex and lots of baths.  Two things I love!

Every Tom Robbins book is similar in this respect: expect the unexpected…like utensils having a conversation or a love story that takes place inside a pack of camel cigarettes.  I usually would not be a fan of such absurd notions, but with Tom Robbins, it all just works.

Have you ever seen an author speak?

No, I hadn’t either.

There is an appreciation of the Arts and there is obsession.  Obsessed are the people who go to readings 3 nights a week at coffee houses, live their lives through books instead of really living there lives, and…people who frequently go see authors speak.

I made an exception with Tom Robbins.  My girlfriend at the time, knowing my fondness for Tom Robbins, surprised me with tickets to go see him at a famed theater in San Francisco (I don’t remember its name).  I was definitely excited for this but also had a bit of trepidation: if I did not like him, it would change my whole perspective when reading his books.

Recently, I saw Tom Wolfe on the Bill Maher show.  I have read many Tom Wolfe books (Bonfire of the Vanities, A Man in Full, and one he had just written called I Am Charlotte Simmons) and enjoyed all of them.  Then, I saw him on Bill Maher and found him pompous and arrogant.

I’ll still read his future books but will have to struggle to disassociate the man from the man’s works.

I did not want this to happen with Tom Robbins but it was a risk I was willing to take.

The theater was packed.  It is San Francisco after all and unconventional notions, like those in Tom Robbin’s book, play very well there.

The audience was comprised of more women than men.  Many women love Tom Robbins.  Because Tom Robbins loves women and this is easily sensed in his books.  I remember a passage from one of his books.  One of the lead male characters became aroused when he smelled the urine of his lover…after she ate asparagus.  That’s love!

The audience at the show was similarly excited and aroused.  I remember thinking that it felt more like rock concert than an appearance by an author.  All of Tom Robbins books are bestsellers, but they’re only best sellers for a week or two.  Because when Tom Robbins fans hear that he has written a new book, they all immediately buy it.

When Tom Robbins walked on stage, he may as well have been the Rolling Stones-there was that much energy.  After 15 minutes of applause, the audience finally sat down.  And Tom Robbins, at the podium said along these lines:

“I’ve prepared two readings for tonight and you get to choose which one you want to hear.  The first is an essay about my writing methodology.  And the second, the second comes with a warning.  It’s about an escape but not a traditional escape.   It’s about an entrapment, an entrapped emission.  It is the story of a bottled fart looking for an escape.”

Well, the audience went nuts over this and I knew we were going to hear this story.  I wanted to hear more about his writing, but I’ll roll with the bottled fart if I must.

At the end of the escapist tale, there was a question and answer section.

“Tom, what is your favorite book of all that you have written?”

Without much delay, he said:

“It would definitely be Jitterbug Perfume.”

After a few more questions, a very attractive woman said:

“Tom, I am a huge fan.  And I love the way you write and your appreciation of women.   And I love you.  I just have one question:  When the show’s over, will you come home with me?”

He responded with a sly smile:

“I want to thank everyone for coming tonight…the show is now over!”