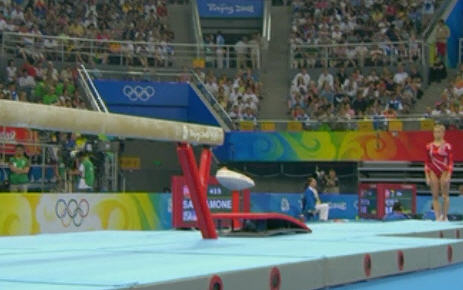 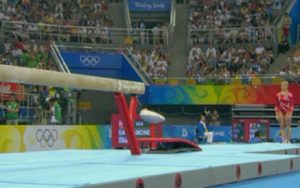 Imagine.  Just Imagine.  You train your whole life for one moment, and when that one moment comes, you fail.

This is what happened to Alicia Sacramone in the “Women’s” Gymnastics last night.

Through a slight miscue on China’s part, the American girls still had a chance to win the gold as they entered the balance beam competition last night.  The evident leader of the team, Alicia Sacramone, was first up.  In a mount that seems near impossible, she approached the beam backward, trying to begin with a back flip onto the beam.  She landed on the beam but had no balance.  As she fought to regain her balance and stay on the beam, one second that seemed like an eternity, she fell–a fall that basically ended America’s chance at a gold.

This was her moment, a moment which carried the weight not only of a team, but a country.  Her face, up to that moment, had been the face of inspiration, a face of joy, and face of hope.  All that vanished in that one second.  As she teetered on the beam, trying to maintain her balance, you could see all this hope and joy being unceremoniously, almost maliciously, sucked right out of her.

In contrast, as the television switched between swimming and gymnastics, we saw Michael Phelps break the all time gold-medal record.

We watch the Olympics for precisely this drama.  If the results were all Michael Phelpsian, without the possibility of failure, it would not be so riveting.  Unfortunately, successes need their counterbalance and last nights gymnastics provided just that.

It killed me to see Alicia Sacramone’s fall last night.  It was as if someone walked up to a happy, young, family girl and told her, coldly and bluntly,  you are adopted…absolutely robbing her of all she thought she was. 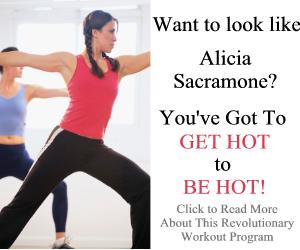 I don’t know what happens to Olympians after their moment.  Many probably go on to lead normal lives with fond memories of the Olympic games.  Others, never able to experience anything like it,  probably spend their lives reliving and retelling moments of their Olympian days. I wonder what will happen to Alicia.  My sincere hope is that she is able to come to grips with her moment last night and find a suitable and comfortable place to put the experience.

Her Olympics were about just that one moment, that one second, that she fell off the balance beam, a truly unbearable moment for a child to endure.  In that moment, while she was on the floor, after having realized what she’d done, she paused and then got back on that beam and continued her routine.

For most of us, the lessons of life unfold gradually.

For Alicia, life-lessons unfolded instantly, in one moment, on the world stage.

…on the balance beam.

“Let me tell you something you already know. The world ain’t all sunshine and rainbows. It’s a very mean and nasty place and I don’t care how tough you are it will beat you to your knees and keep you there permanently if you let it. You, me, or nobody is gonna hit as hard as life. But it ain’t about how hard ya hit. It’s about how hard you can get it and keep moving forward. How much you can take and keep moving forward. That’s how winning is done!”  –Spoken in the movie Rocky Balboa to his son