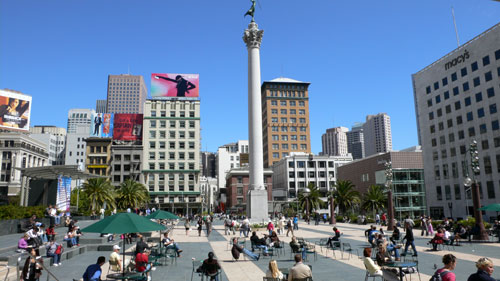 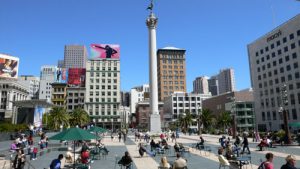 This essay was written in the mid-2000’s when the economies of Europe were thriving and the U.S. was unknowingly on the threshold of one of the biggest financial disasters in our history.

This essay asks an important question that is perhaps even more valid today:  Are our entrenched practices holding us back in the modern economy?

One startling example of this is the advances made in China.  As we read in the article Why California can’t compare with China, “China has built almost 30,000 kilometers of high-speed rail lines since the beginning of the century, while the US has completed virtually none.”

Obviously, our Democratic principles have a lot to do with this.   Rightfully, we are unwilling to stifle the rights of the people for progress.  But we still need to consider workable solutions because, while our people are not being stifled, our country may be.

Enjoy the article below from the early 2000’s.

Sitting in Union Square, in the heart of San Francisco, you will find many languages spoken.  People come here from all over the world to experience San Francisco, one of Americas, if not the worlds, best cities.  They also come here to shop.

If you walk into any of the stores outlining the beautiful palm-tree lined park of Union Square, Macy’s, Saks, Nieman Marcus, you will find foreigners here to buy goods on the cheap.  Foreigners, especially Europeans, are flocking here to get goods on the cheap (at Saks, no less) like Americans use to do in their countries.

What is going on?  Is America the new Mexico, with foreigners coming to our shores to get all their proverbial silver on the cheap?

Why would a city refuse or delay an offer for free wireless to all of its citizens?

Perhaps a better question to ask is this:  Who stands to lose if Google provides free wireless access to the whole city?

We need look no further than my situation to answer that question.  I currently pay about $80 per month to the phone company, AT&T, which is broken down as follows:  $40 a month for the active phone line (which I need for Internet) and $40 a month for the actual Internet.  If google provided reasonably fast free wireless Internet access, I would cancel my phone service immediately.  I use my cell phone for all calls anyway; the only people who call my land line are salespeople.

Now, Google would like to implement this wireless service nationwide.  Let’s assume then, perhaps conservatively, that 30 million people would cancel their land phone and Internet service.  That would amount to $2.4 billion dollars each month in lost revenue to the phone company.

With these huge potential losses, do you not think that the phone companies are using every last lobbyist and lawyer on the payroll to block this progression?

Many other countries bear no such burden of past successes and, because of this, might just pass us right by.  For example, many third world countries are unencumbered by entrenched land-based communication services.  Thus, they will go straight to wireless unimpeded by lawyers and lobbyists.

In this article in Technology in Society, the authors posit that “as emerging markets look for opportunities to “leap-frog”, they can quickly adapt to next-generation wireless technologies like Wi-Fi and WiMAX, thereby gaining advantages over other traditional wired infrastructures.”

This phenomenon is not exclusive to the communications industry; it exists in many industries-entrenched companies preventing, or deliberately squashing, technologies that will enable America to compete in the future.

Paying a lot for gas right now?  Do you ever wonder what happened to the idea of the electric car?  Read more about how the auto industry squashed the electric car.   In an article Electric Dreams, Patrick Quinton writes “how the automakers are so distracted by the effort to maintain the status quo that they short circuit the technology and neuter the ingenuity that could ultimately save their futures.”

Well, it might not be unreasonable to ask this question:  Would America be at war with Iraq right now if everyone drove an electric car?  If the answer to this question is “no”, General Motors, who deliberately squashed the development of the electric car, is directly responsible for the lost lives of countless Americans.

I don’t sit here in Union Square in San Francisco intending to bash General Motors, AT&T, or any other company for that matter.  That’s Michael Moore’s purview.

However, I do wonder aloud why our country has become the new Mexico, with foreigners all around us not to embrace our culture, but to exploit our weak economy and buy stuff cheaply.

I wonder about this.

There is hope.  Recently, Google, combined with Earthlink, did receive the contract for free wireless throughout San Francisco.  This proves that companies like AT&T will fold when they realize that they are fighting a losing battle.

However, when these companies finally acquiesce, will the battle already be lost?