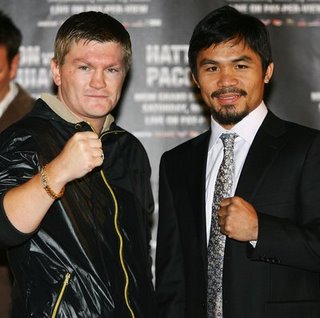 Manny Pacquiao, of the Philippines, and Ricky Hatton from Manchester, England, meet tonight in what my be the best boxing match of the year.  If you have never been a boxing fan or have left the sport out of frustration, tonight’s Junior welterweight title match is a reason to enjoy the “sweet science” once again.

Boxing has fallen out of favor in recent years for many good reasons:  There are too many shady promoters (can we say Don King?), too many weight classes, too many weight divisions, too many “manufactured” stars, and too little of what boxing fans need:  Great fights between great fighters.

In the wake of MMA–Mixed Martial Arts–many have questioned the continued viability of boxing.  Pay per view trends in each sport were beginning to support that claim.  Mixed Martial Arts, once relegated to the blood and lust fans, regulated itself (or was regulated!) and became a sport with true cross-over appeal.  The pay per view numbers began to meet and exceed those of prized boxing matches.

Boxing and MMA are two different sports.  Many will say “fighting is fighting is fighting.”  True, in each sport, the competitors go to war and seek to beat the other into submission, but that is where the similarities end.  Boxing is (or was?) pure, natural and…sweet with a storied history.  MMA is new, raw, and much broader.  A fighter can use multiple skills from wrestling to Jujitsu to defeat their opponent.

MMA captured the viewership of many boxing fans not for the blood and guts (its rawness!) but because it was beginning to show signs of what people loved about boxing:  competitors willing to lay everything on the line to beat their opponent.

We recently witnessed the last fight of one of MMA’s greatest fighters, Chuck Lidell.  He embodies the phrase lay it on the line.  When Chuck Lidell walked into the ring, he would give you everything he had, risking life and limb (a literal statement in MMA) to provide a great fight.

When was the last time you have seen this in boxing?  The boxer laying everything on the line in the ring?  The recently retired (and now becoming unretired) greatest pound-for- pound boxing champion is Floyd Mayweather Jr.  With such amazing skill, he never once seemed to give everything he had, or risk anything, in the ring.  True, he would always win fights, but he never won the hearts and minds of the people.  He was always in it for him, not for you, not for the fans.  The people paid Floyd Mayweather Jr.  He did not pay them back.

In this manner, boxing lost its fan base.  The people decided to stop paying because they were not being paid back.

Tonight the fans will be paid back full.  The fighters tonight, Manny Pacquiao and Ricky Hatton, embody what the great sport of boxing is.  They will give absolutely everything that they have in the ring tonight.  They are here for you.  They will pay you back.

At least for this weekend, boxing is once again The Main Event.