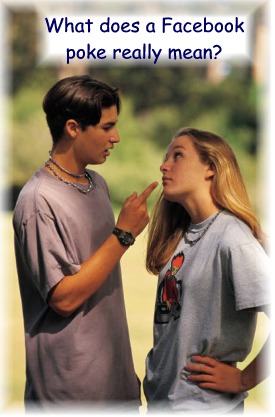 My friend Bob asked me the other day, “What does it mean to poke someone on Facebook?”

Initially, I did not give it much thought and responded, “A poke on Facebook…it’s simply an acknowledgment.”

“But,” Bob doth protested, “do you think sometimes a Poke can be much more than a poke?  Do some Facebook pokes have more significance than others?”

Bob likes to over analyze the meaning of things and so do I.  If we don’t, life can be really boring, right?  And then you’ll find yourself reading things like What can I do on the Internet when I’m Bored?

“So,” I asked Bob, “What is a Facebook poke to you?  Were you just Facebook poked by someone and think it was more than an acknowledgment?”

“Oh yeah!” Bob responded.  “I think it was much more than an acknowledgment.”

Bob explained the situation and it turns out that there is potentially much more beneath the surface with a Facebook poke.  A Facebook Poke takes very little time but can say a whole lot!

You see, Bob was Facebook poked by Alexandra.  Alexandra was an old friend of Bob’s and their friendship often extended into the realm of friends with benefits.  However, five years prior, Bob attended Alexandra’s wedding (is it appropriate to invite an old lover to a wedding?) to another man and realized the benefits might be over but the friendship would continue.

As often happens between single and married friends, the lives of Bob and Alexandra went different ways as she embarked on her new married life and he continued on his current road to nowhere…having a lot of fun in the process.  (The road to nowhere often leads somewhere special, Bob thought.)

Thus, aside from the annual Christmas card and the semi-automated Facebook birthday salute, Bob and Alexandra had no contact.

Bob initially met this Facebook Poke with regularity.  It’s an acknowledgment, he thought.

But then he began to wonder:  What does it mean to poke someone on Facebook?

A Facebook Poke is a conscious act.  You see the Poke button (which is more difficult to find with the new Facebook design), you select it, and then you choose the person that you want to poke.  It does not happen accidentally.

Bob set about investigating this out of the blue Facebook poke from Alexandra.  And how do you investigate on Facebook?  Visiting profiles, that’s how.

Bob casually went to Alexandra’s profile page not really expecting to find anything too special but to see if he could determine why Alexandra had poked him when they had not had contact in five years.

And there it was.

This was much more than just an acknowledgement.

Perhaps, just a little more than perhaps, Alexandra sent her symbolic Facebook poke with the hopes of a return poke of an entirely different nature.  Perhaps, Alexandra was single again and wanted her benefits back!

So, when we ask, what is a Facebook poke, often times it is just an acknowledgment.  At least, I hope so. Jerry, Jeremy, Brian, Eric, Todd…you’re acknowledging right?  San Francisco has not made that much of an impact 😉

Other times though, you will find secret meaning in a Facebook poke.  The meaning of the Facebook poke may be much more than a simple acknowledgment.  And, in the case of Bob and Alexandra, it turned out to be much, MUCH more!