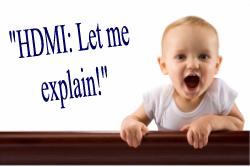 After reading my post about how to connect your TV to your PC, my friend saw the term HDMI and asked me: What Is An HDMI Input On A TV?

So, for him, and all else who wonder, I thought I would tell you a brief bit about what is an HDMI input on a TV. If you have recently purchased a new LCD TV, you have HDMI and may not even know it. This article will help you find out.

Let’s begin with this question:

What Does HDMI Stand For?

HDMI stands for High Definition Multimedia Interface. HDMI contains 19 wires wrapped in a single cable, which is not important at all to know 🙂 . But what this means is that it provides hugely fast transfer speeds and sends audio and video over the same cable.

If you still have your older audio/video equipment, you may have a DVD (or VCR if you role “old school”) connected to your TV and this DVD connection requires three separate (though usually connected) composite cables…one for video and two for audio (left and right). HDMI requires only the one cable.

What does this mean to you?

Well, like with USB in computers, everything will be connecting to your TV through the HDMI interface. We see this now with Blue Ray Disc Players, video games, and many of the latest camcorders like the awesome Flip Video Camcorder.

What Is The Difference Between DVI And HDMI

As we see in the video series How To Connect Computer To TV, many people were using a DVI to HDMI interface to connect their computers to their LCD TVs. Thus, they often ask What Is The Difference Between DVI And HDMI?

When we look at HDMI vs DVI, we could say that DVI is the founding father and HDMI is the perfected son. This is because DVI came first and HDMI, based on DVI, is the evolved version of DVI.

Since they share a common gene pool (sending signals in native digital form), there are only two practical differences between the two. The first being that DVI only sends video signals while, as mentioned above, HDMI can do both.

And the second? Pirates beware…

HDMI has something inherent to it called High Definition Content Protection, or HDCP.

This is why the movie industry is loving HDMI. If you are one of those out there who likes to copy movies, your pirating career hit a speedbump. Though, truth be told, there are probably some geeky Swedish, or perhaps Norwegian, computer science majors working on decrypting HDCP right now.

This video from YouTube provides a great explanation of HDMI and HDCP in video format.

Video: What is HDMI?

A video tutorial about HDMI.

What Is An HDMI Input On A TV: Summary

I have tried to provide an explanation of What Is An HDMI Input On A TV? for my friend and Internet visitors. Can you define it now? Do you know what does hdmi stand for? Can you answer the question: What Is The Difference Between DVI And HDMI? And if pressed, could you deliver a soliloquy on HDMI vs DVI?

Did I not write clearly? Did you not read clearly? Are we not simpatico?

Ok then, the quick and dirty review:

What Is An HDMI Input On A TV: It is the digital standard for connecting things to an LCD or High-Def television.

What Is The Difference Between DVI And HDMI: HDMI is newer and can carry audio, which DVI cannot. HDMI also provides privacy protection in the form of HDCP. This is bad for BS (BS is my friend who likes to copy his movie rentals…we’ll see if he reads this and comments below. We should also include JJ who burns pirated movies of a more salacious nature, but I am way off point 🙂 )

What Does HDMI Stand For: High Definition Multimedia Interface

HDMI Vs DVI: Who wins? HDMI is much better because it carries both audio and video.

Ok, now close your eyes and tell me what HDMI stands for?