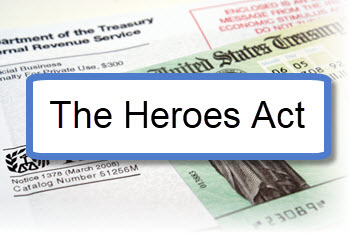 The Heroes Act, which passed the house on Friday May, 15th, is a proposal for a second stimulus package to assist American individuals and businesses during this economic crisis caused by the Coronavirus — get the protective gear you need.

The bill itself, which originally exceeded 1800 pages in length but has recently been revised to be more agreeable to Republicans would provide a second stimulus payment to most Americans and is very similar to the first stimulus check of 2020.

The Republicans were appalled by the Heroes Act while the Democrats were urging its passing through the Senate. In the end, the Senate did absolutely nothing with the original Heroes Act, as Joe Biden mentioned in the final Presidential debate.

The Senate then reconvened on July 20th, 2020, had to get something done within 15 days, and came up with The HEALS Act, which was basically DOA.

As of October 2020, a full 5 months after the original submission of the HEROES ACT, Congress has still not come up with a plan for the American people.  Don’t these people work for us?

Because 1800 pages is quite a bit for the average person to take in, let’s review the top 10 proposals of the Heroes Act.

So when should you expect your next stimulus check or your rent payments to be forgiven?

That’s unlikely at the moment because the Republican response to the Heroes Act has not been very welcoming. In fact, as mentioned above, their actual word was appalled.

But as Republicans see the appalling, ever-worsening situation of Americans, perhaps they will change their mind and a second stimulus will be on its way courtesy of the latest revision to the HEROES Act.