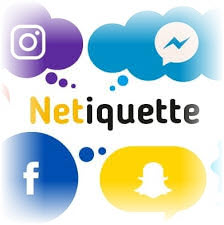 In today’s world of brash, rude, inappropriate behavior online, it’s important to remind ourselves of these 10 rules of Netiquette.

Netiquette provides general guidelines as to how you should conduct yourself in cyber-space — the do’s and the don’ts of proper behavior.  The term is derived from network etiquette.

“…a set of social conventions that facilitate interaction over networks, ranging from Usenet and mailing lists to blogs and forums.”

Way back in 1994, Virginia Shea penned a book entitled Netiquette

in which she examines the proper rules of behavior on the Internet.

She must have foreseen both the growth of the Internet and the corresponding growth of disrespectful behavior online.

So, the question is:  Are you behaving yourself?

Here are the 10 Best Rules Of Netiquette according to Virginia Shea.  You an find lengthy examples of each here: