In this book review of Saint X, I’ll tell you why this is a book that gets better after it begins but won’t leave you disappointed when it ends.

Well, just as you won’t win the stuffed animal until you make the basket, you won’t know the answer to that question until you get to the end.

Books make promises to us.

The second promise comes in the form of promotion, which for me is usually spotted on the Amazon book page. This promise takes the form of notable praise (“A smart, socially conscious thriller that will take you away”) and a sometimes-deceptive summary (“a haunting portrait of grief, obsession, and the bond between two sisters never truly given the chance to know one another”).

Does Saint X deliver on its promises? Let’s delve in deeper to find out!

The very first page of the book on my Kindle is exactly two sentences. The first sentence is: Begin with an aerial view.

The second insanely-long, hyphenated, comma’d, semi-coloned sentence can be seen in my Kindle screenshot below. 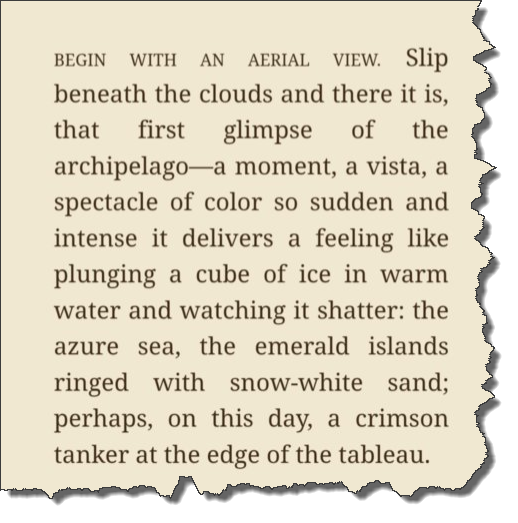 Uh-oh, I thought. Am I reading an author who has an unhealthy self-love of her descriptive abilities? I get it — it’s a Caribbean island; let’s move on.

Much of the first chapter of this book contains these excessive descriptors of this imaginary Caribbean island called Saint X. But, In the midst of this overabundance, we get insightful social commentary of those foreigners vacationing on the island and the locals who cater to them.

Suddenly…”The time is late morning. Look. A girl is walking down the sand.”

That girl’s name is Allison and, in the end of the first chapter, Allison goes missing and is later found dead. (That’s not a spoiler because it’s mentioned in promise #2.)

Oh no, I thought again. Have I stumbled upon a Disappearance of Natalee Holloway type of story?

The answer is yes and no.

Yes, they are both stories of young attractive collegian girls with ostensibly impeccable behavioral histories who fraternize with locals, get abducted, and are later found dead.

No, in the sense that with The Disappearance of Natalee Holloway story we do not get an in-depth, intimate portrayal of all of the participants, particularly the siblings of the deceased and her supposed abductors.

Conclusion: Does Saint X Live Up to the Promises?

When a book has been on the bestseller list, it’s a lot like a movie with an IMDb rating of 7.5 or higher – – you expect quite a bit!

I had this experience recently with the Oscar-winning movie Parasite. I may have liked it a lot more than I did had I not entered with such great expectations.

Similarly, based on the Amazon book page for Saint X, I had rather high expectations. A lot like my experience with Parasite, I left neither satisfied nor dissatisfied.

I guess the feeling with both was Hmmm…that was somewhat interesting.

But I was not disappointed when I reached the end.