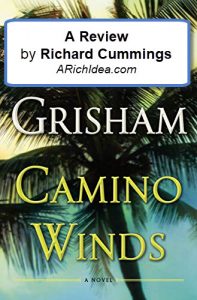 Often, I tell my readers why I chose a book. A book is always a time commitment and so we want to choose wisely.

No such decision making process is required when a new John Grisham book comes out — I will read it.

Though I’ve never met John Grisham personally, we have probably shared more profound time than you do with a majority of passing acquaintances. Selfishly, I suppose it’s always been a bit of a one-way relationship, with John sharing all of his ideas with me and me observing his ideas like a sponge providing nothing in return.

I suppose this is fair since I essentially paid for my time with him by purchasing his book, which in this case, is Camino Winds.

One tactic that I like to take when reviewing a book is to compare what I thought about the book to what it says on the Amazon promotion page for the book.

This quote is extremely clever. Why?

She summarizes the book and then adds at the end that it is “the type of wild but smart caper that Grisham’s readers love”.

What does she not say? Her actual opinion of the book.

If you wonder if you have already read John Grisham’s Camino Winds, you can be forgiven — I thought the very same thing.

It has a similar title to a book that is its predecessor called Camino Island.

You may remember that one of the lead characters from that book — Camino Island — was named Bruce Cable, who owns a bookstore but really earns his big money dealing in rare books.

As I wrote in my review of Scott Pratt’s Due Process, I like to avoid all types of sequel and series books because it seems to be a lazy way to financially capitalize on past successes — no new characters need to be contrived, only new circumstances.

And the circumstance that is presented in the beginning of Camino Winds is a massive hurricane, where destruction and possible death will be a foregone conclusion.

So what a delightful time to commit a murder, no?

This accidental hurricane death is quickly revealed to be more than that by Bruce Cable and his band of island buddies.

Conclusion: Should You Read Camino Winds?

Let’s get back to the quote above by Delia Owens, author of Where the Crawdads Sing, about what she doesn’t say…the opinion she never gives.

She never actually says that she liked Camino Winds — she says John Grisham readers will love it.

I will confess to being a big John Grisham fan. And so, Delia Owens is right — I did enjoy the book.

And in a very odd compliment to John Grisham, I will say I enjoyed it less than any other John Grisham book — it takes forever to really get going and, as mentioned earlier, I’m not much into these recurring characters that authors, and I suppose they’re publishing houses, love; they’re like movie sequels, guaranteed financial successes which are never quite as good as the original.

So, as I promised in the first sentence, I’ve told you something that you did not want to hear — it’s not John Grisham’s best book, not even close.

And something you did want to hear: if you are a John Grisham fan, you will enjoy Camino Winds. 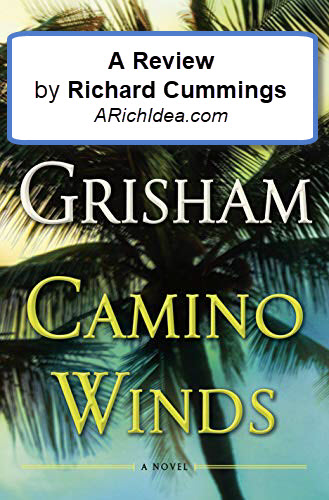