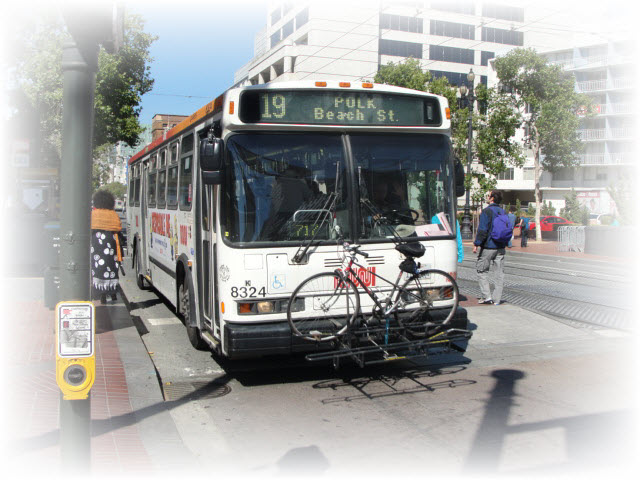 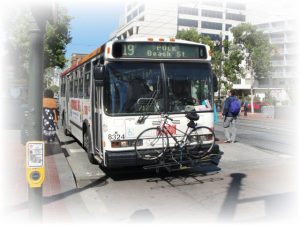 If you want to feel as though you’ve hit a new low in life, ride bus #19 in San Francisco.

Growing up in the Midwest, you never ride the bus. If you do, you need a life change. Unless you’re taking the bus to school, in which case, you’re exempt from such evaluation because your life is great. Students have it so easy. If you’re a student right now, I am sorry that you will not realize this until you’re out of school. Life’s just like that.

I currently smell of the two people who left-right surrounded me on this bus ride. The left lady had been drinking heavily and was fat. I think she was impaired in other ways too…or just really drunk; I couldn’t tell. The woman on the right was homeless and carried the stench of many showerless days. She also had a trashbag or what she would call luggage.

The guy-man straight in front of me boarded the bus with a guide dog; however, he was not blind. He was just stoned. Apparently, this infirmity allows the company of a guide dog. At least, this bus driver allowed it. For those aromatically challenged, who could not smell his condition, he announced it on his sweatshirt: “ganga”. His guide dog, a cute-as-could-be dog, crawled under his master’s seat and immediately passed out. I suspect ganga-man shared his wares with the dog.

Other days, the stench pales in comparison to the name-calling and potential violence. Gang members can take this bus from the hood to the wealthy areas where they can rob, steal, and rape before reboarding for the homeward journey.

Yesterday, my friend Sarah rode the bus and was offered a ride of her own. Sarah is a white girl who’s fulfills certain men’s fantasties:  big tatas and an even bigger rump. I suspect she likes this circumstance. Her endowments preclude too many glances at the face, which is nice but nothing could draw the attention off the other appendages.

So Sarah, assets on advertisement I’m sure (as exhibited by how she arrived at work), was verbally assaulted on the bus and nearly physically assaulted as she was followed from the bus to work. The gang-members on the bus howled at her:

“Come on baby. I’ll give you this large c**k and you’ll scream”

“Baby I’ll give it to you long and hard”

Little do they know, Sarah usually responds quite affirmatively to this kind of dialogue. She prefers overt. Delicate does not work with Sarah. However, overt with potentially real violence didn’t do it for her. When they got off at her stop, clearly not theirs, she was scared. She practically ran the two blocks to work as they hurried after her. Entering the building, she was visibly shaken and scared.

Sarah rebounds quickly though. By the morning cigarette, she was intact and back to her debaucherous dialogue about breasts, d@cks, and as*es.

“There’s nothing worse than a long pencil d@ck” she said as we broached the topic of these black men potentially having large members. “I prefer them thick and short to skinny and long. Skinny and long is like a pencil going in you and it hurts…it kind of pokes you at the end.”

I would not want to be black and have a small member. So much would be expected and so little delivered.

But what do I know? I’m stuck riding the worst bus route in America: the #19 in San Francisco!