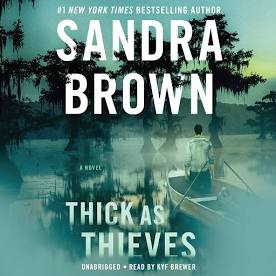 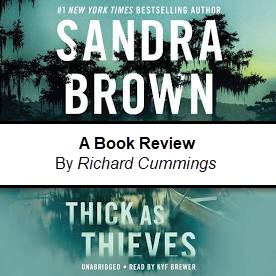 As I was reading Thick as Thieves by Sandra Brown, I couldn’t escape comparisons to the Netflix show Ozark, which I really enjoy. Did I enjoy the book Thick as Thieves equally? That’s what we’re here to find out.

I usually choose the books I read; they do not choose me. In this case, I abandoned that practice and paid a price.

I typically do at least a modicum of research prior to beginning a book. As I’ve said before, you’re going to spend a week or two with this thing so you probably want to know what you’re getting into. On what occasion would we commit ourselves to something for two weeks without doing some upfront research?

But as I said, I abandoned that practice this time, having been victimized by Internet manipulation — I saw an ad for Thick as Thieves online, downloaded it to my Kindle, and started reading.

The Amazon page for this book promises a “tantalizing thriller” in which “a woman uncovers lifelong secrets”.

Hmmm…a bit of an oversell?

The first sentence of the book read: “Talking about it is the surefire way to get caught.”

Surefire is one of those down-home words often employed in backwoods communities, and that’s what we have in this book — a bunch of backwoods country people, some of whom are hell-bent bent on trying to do wrong and make wrong and they are up against benevolent others who are trying to do right and make right.

Who do you think will win?

Those in the battle between right and wrong are all somehow related to a twenty year old crime in which a half a million dollars was stolen.

Throughout the book there are plenty of surprises about who was involved in said crime and the reasons behind it.

Familia relationships are challenged, sexual mores are exposed, and new loves are discovered throughout Thick as Thieves as the mysteries of this long ago crime are slowly revealed.

But should you read it?

What is it about these backwoods stories that has us intrigued as a nation?

We are all devouring shows like Ozark and Virgin River on Netflix, all of which focus on communities that are usually different from our own.

Is it the down-home honesty we like? Is it a redneck wannabe complex? Is it a comparative feeling of superiority? Perhaps a little bit of all three?

Thick As Thieves has all of the characteristics we apparently prize so dearly: the criminal aspect of Ozark, the down-hominess of Virgin River, and even the love between the hands-worn construction worker and the more civilized women who wants something real like in the ever treasured Bridges of Madison County.

Is it all worth it?

I would say yes if … (1) it’s a book you have laying around, (2) you’ve already seen all of Ozark on Netflix, and (3) you have a week or two for a simple indulgence.

I’d probably give it a generous three stars, but the collective sentiment on Amazon is 4 ½ … so you may like it better than I did.

As I was reading Thick as Thieves by Sandra Brown, I couldn’t escape comparisons to the Netflix show Ozark, which I really enjoy. Did I enjoy the book Thick as Thieves equally? That’s what we’re here to find out.