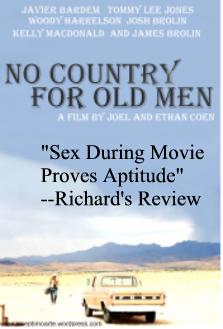 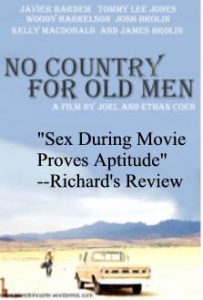 After seeing No Country For Old Men, I was left with this feeling: huh? This movie won the Oscar for best picture?

I saw the movie in Uruguay. Typically, they show English movies in English with Spanish subtitles. I like this. A dubbed movie (which they do on television here) is simply irritating.

Something else irritated me as I watched this movie: people in Uruguay live with their parents for a long time because they cannot economically afford to move out. This in itself does not bother me; it’s just a fact of life. The ramifications of it are what got to me on this particular occasion.

What does this have to do with No Country For Old Men? Well, when people can’t get their groove on at home because their parents are there, they select other places. Usually, it’s the park. The park is Inspiration Point for Uruguayans. The one hour themed motel is the other option-very popular here. However, the two seated next to me had chosen the movie theatre in lieu of the park or motel.

So, during the final scene, when Tommy Lee Jones is sharing his beliefs that this new world is No Country For Old Men, I was hearing Sí, bebé. Me gusta. Acá. Ahora. Bebé. Hmmmmm….

What’s the Point of No Country for Old Men?

Perhaps these two were just illustrating the point of the movie. Nowadays, people feel they can do whatever they want wherever they want without regard for anyone else. I doubt it though. I think they just wanted a quickie. More power to you kids, but please, next time, hit the one hour motel-it’s the same price!

Unmet Expectation in No Country For Old Men

Going to see a movie after it has won the Oscar is like New Year’s Eve night. All build up followed by unmet expectations.

Are the Cohen Brothers That Great?

And what is with all the hype over the Cohen Brothers? It’s a Cohen Brothers picture. Oooohhhh! They made Fargo, which I liked, but many of their other movies are quirky to the point of ridiculous.

What Does Everyone Think of No Country For Old Men?

I have become accustomed to visiting IMDB after I see movies to see what other people thought. A few weeks ago, my friend and I watched a movie called The Quiet. We both thought it was excellent in a real and disturbing way. I went to IMDB to see what other people thought. Why have not many people seen this movie? Everyone on IMDB really liked it. I highly recommend it. Plus, Elizabeth Cuthbert is in it so you’re in for a visual delight even if you don’t like the movie.

So, with the huh?, why did people love this movie sentiment I went to IMDB to find out what other people thought. And there, I discovered proof of intelligence in the world. The first comment I saw was:

Screw this…, 4 February 2008
don’t waste your time, good acting, good suspense but it doesn’t go anywhere and has a very disappointing ending…

Then, I read this:

Coens firing on all cylinders. Brilliant., 16 May 2007
If this doesn’t end my year in the top two films of the year then we are in for one hell of an awesome year of movies.

Then I read a post called “no movie for smart men”. And on and on I read. This dialog was much better than the movie. There are several heated interchanges that go along these lines:

They say that we’ve become an apathetic country; that people just sit back and watch TV, earn their money, and let the world pass them by. Visit the IMDB movie boards and you’ll find the contrary. You’ll find proof of intelligence in the world.

Summary of No Country for Old Men

In truth, I need look no further than the kids sitting next to me for proof of intelligence in this world.

They were having sex for two hours while I was watching a stupid, boring movie that mistakenly one best picture!