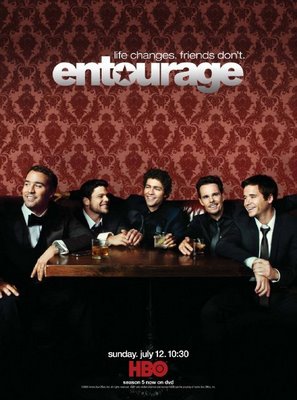 Vinnie and the boys of Entourage are back for Season 6.  The Entourage Season 6 Premiere, named Drive, has Vince literally, and figuratively, back in the driver’s seat.

After last years doldrums, with the boys hurtin’ after their movie bombed at Cannes, they are back on top as last season ended with Martin Scorsese offering Vince a lead part in his new movie.

This is good.  We watch the show to live vicariously and who wants to vicariously live through pain.

The Queens Boys are up to their old tricks in the Season 6 Premiere.  Eric, the little Irish munchkin, is finding delights around every turn and his old gal Sloan is jealous and wants him back. Vinny, after a gal tells him, “I don’t want to have a one-night stand with a movie star”, indulges her in the car not 10 minutes later (Vince has just learned how to drive a car and this is his first time in a car).  And Turtle, with Meadow Soprano…go Turtle!

How much better can it get?

We’ll just have to wait till next Sunday to find out!

PS: Need to catch up on Entourage? All past seasons are available on DVD.