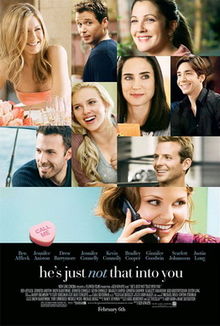 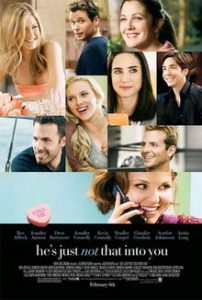 A marginal movie can become a really good movie if you enjoy the topic.

This was the case when I watched He’s Just Not That Into You.  I thoroughly enjoyed the movie because the topic is compelling:  Do women realize when a guy is just not into them?  The movie is more than that as well…it’s about relationships between men and women.

So, rather than write so much about the artistry of the movie, I want to investigate the truth of the movie couple by couple.  Below, I’ll take a look at each of the couples in the movie and ask the question:  Would this happen?  Was the story of the couple told truthfully?  Was the outcome a real reality or a movie reality?

He’s Just Not That Into You, Couple #1:  Gigi and Alex

I like the way the movie began, with women the world over anecdotally giving their broken-hearted friends excuses for why their relationships did not work when the reality was the guy was just not into them.  Nobody personified this broken-hearted puppy dog more than Gigi, played beautifully by an actress named Ginnifer Goodwin (does she know she spelled her first name wrong?).

Gigi is the girl who never gets the guy.  And when we see her in action, we see why!

As Gigi is stalking a guy named Conor who is just not that into her, she stumbles upon a relationship consultant in the form of Alex, the bartender-owner played by Justin Long, the guy from the Mac commercials.

Alex is a big time player (pronounced with 2 syllables!) as are many decent looking bartenders.  At a popular bar, bartenders are like the guy in the Ferrari (see Girls and Cars for more) or the workers at Club Med.  Ladies, what is it with you and the help?

When the two meet, Gigi sitting at Alex’s bar, Alex appears as a straight-shooter who doles out his relationship advice, essentially telling Gigi that Conor is not that into her and to move on.

The relationship continues as Gigi continues to call Alex for relationship advice.  Then, because he accepts her calls and she misreads other signals, Gigi concludes that Alex is into her.  When Alex invites Gigi to his party, she now thinks this is it–their coming out–and she believes that she is Alex’s date to the party.

Gigi essentially assumes the role of hostess of the party as she sees herself as Alex’s girlfriend.  Alex sees none of this and has his good olé time partying and romancing.  The party ends late with Alex playing video games with this incredibly hot girl and Gigi cleaning up the mess of the party.

With the hour late, the hot girl leaves and Gigi pours out her soul to Alex, who continues to tell it like it is in the scene below:

Their story, up until this point, is not only movie reality but real reality.  Up to this point.

And this is where the movie takes an unreal turn.

Alex decides he is head over heals in love with Gigi.  This is not reality.  Did you see the way that he talked to her in this scene?  There is no love there.  She is a PC, not a Mac!

The advice that Alex shared up until this point in the movie was true.  This part of the movie is untrue.

I know we all want to believe the contrary–that this would happen–but the contrary is not real reality, it is movie reality.

He would have never let the video game girl walk out the door so easily.  Did you see her?  Hello!

It is true that, in the end, a bartender may want a deeper relationship.  He has seen, and had, many bar floozy hotties and he wants something real.  The reality is that his real will be a good-girl hottie and not be in the form of a Gigi.

Odds of the relationship happening in real life?  2%.

Conclusion:  This is relationship is movie reality, not real reality.

If you think you have an honest husband, don’t let him near Scarlett Johansson! This might happen:

Scarlet Johansson – He’s Just Not That Into You Pool Scene

We first meet Ben, a loving husband to Janine, at the supermarket where he happens upon Anna, played by Scarlett Johansson.

Anna and Ben have a flirty encounter but he reveals to her, as any loving, honest husband would, that he is married.  This of course attracts her more and he is now unattainable.

Though Ben initially upheld the sanctity of marriage, he quickly succumbs to Anna’s advances, and she proceeds to eat him up and spit him out leaving him lonely and confused.

When asked who is the hottest actress working today, many men would respond Scarlett Johansson   But she is more than just hot.  She oozes sexuality from every pore.  Men will knowingly allow her to destroy their lives if the tradeoff is time with her.  She has that power–she is a black widow; she mates and then she emotionally kills!

On a side note, I am very concerned about the fate of Ryan Reynolds, a great actor who somehow pulls off being good looking and very humorous at the same time.  Did you see Definitely Maybe or The Proposal?

Pray for him people.

He might just suffer the same fate as Ben in the movie.

He’s Just Not That Into You, Couple #3:  Beth and Neil

Can a man be totally into you, love you forever and exclusively, but never want to get married?

Beth and Neil (played by Ben Affleck and his curiously elongated head) are the most interesting relationship in this movie.  After living together for 7 years, Beth gives Neil the ultimatum.  Marriage or move on.  His silence provides the answer and she leaves.

Neil always treated Beth well and never indicated in any way that he wanted a life without her.  He simply was just against marriage.

This situation is tricky because, as expressed in the movie, most of the time when a guy says that he is against marriage, he is just not down with the idea of marrying that girl.

However, there are some men (about 10%) who are philosophically against marriage.  It is not a difficult philosophical argument to make either.   Unfortunately, this gives false hope to the many women waiting when the reality is just he’s not that into you.

In this movie, I bought that Neil was simply against marriage.  Of course, in the end, her happiness was his main concern and so he, very romantically, proposes with the whole ring stashed in the old, throw-away pants trick.

Conclusion:  A real relationship based in real reality with some movie stunts (the proposal) thrown in for a good measure.

He’s Just Not That Into You, Couple #4:  Conor and Mary

What if Anna walked back in the door?

The Entourage Boy makes his appearance in He’s Just Not That Into You playing…a character that is exactly like Eric Murphy on Entourage:  the nice, little Irish guy who always falls for the girl and has problems.

Though they met auspiciously, this relationship is grade A reality and none too exciting.

My only question is this:

What would happen if Anna walked back in the door?

Conclusion:  He’s Just Not That Into You

He’s Just Not That Into You is just an OK MOVIE as movies go.  But if you enjoy the topic of relationship dynamics, you’ll definitely enjoy the movie!