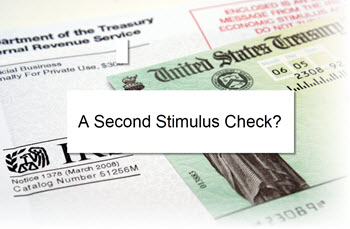 Will you be receiving a second stimulus check payment in 2020 and, if so, how much will it be?

Many of you have already received your first 2020 stimulus payment and gotten all of your Coronavirus protective gear. If your first stimulus payment has not yet arrived, you should be receiving your check or direct deposit shortly if you do not exceed the income thresholds of $75,000 for the full payment of $1,200 or $99,000 for a partial payment.

However, given the current unemployment numbers and the economic uncertainty of today, the one-time stimulus payment is simply not enough to stay above water for a large percentage of the population.

Because of this, discussions began for a second stimulus check payment of 2020 or a second round of monthly stimulus payments.

Unfortunately, you’re going to have to wait. Why?

Though there were many proposals, chief among them the Heroes Act (see a 10-point summary) which passed the House on May 15– none of them could get passed in the Republican led Senate.

The Senate is led by Senate Majority Leader Mitch McConnell who vowed to block the Heroes Act. But he, and the Whitehouse, have agreed that Congress will probably have to pass another Coronavirus stimulus bill and that the second stimulus check will arrive much quicker than the first.

On June 23rd, Donald Trump weighed in on the matter of a second stimulus saying:  “We will be doing another stimulus package.  It’ll be very good…very generous.”

In May, McConnell said the Senate may act on this in “the next few weeks”.  This would have put their decision time at around mid-to-late June for a second stimulus check payment.  However, this did not happen and the Senate took a recess.

As we wait for more details on this second stimulus check decision, let’s take a quick look at the Heroes Act and the four initial proposals for a second stimulus package that preceded it

By May 12th, the House Democrats unveiled the Heroes Act.

The Heroes Act is a $3 trillion dollar economic stimulus bill meant to help individuals and businesses cope with the economic challenges that the coronavirus has presented.

Unlike many of the early second stimulus proposals which provided a monthly payment to Americans, the Heroes Act offers a second stimulus check very similar to the first stimulus check, roughly $1,200 dollars for individuals and also checks for children, with a maximum payment of $6,000 per family.

Another perk for individuals is that the Heroes Act would extend unemployment benefits until January of 2021.

The Heroes Act was passed in the House on Friday, May 15th.

However, the Heroes Act also includes many other provisions, such as farming and election subsidies, and this is one of the reasons the Republicans do not like it.

So, as it stands right now, the Heroes Act is just sitting unattended to on the desk of senators.

Want your Senator to act on this? Here’s how to contact your local Senator:

As with the first stimulus payment, many proposals have been put forth for a second stimulus payment in 2020 due to the spreading of the Coronavirus and the immediate and long-term economic consequences.

Though each proposal is unique, Trump has indicated that he will not sign anything that does not include a payroll tax cut. Unfortunately, a payroll tax cut only benefits those people who are currently receiving a paycheck and does nothing for those millions who have recently filed for unemployment.

The current four proposals for a second-round stimulus payments in 2020 are as follows:

We will keep you up-to-date as the talks of a second round of stimulus payments are currently still in their infancy.