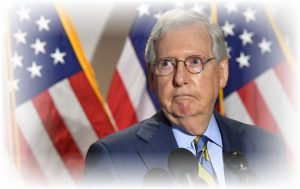 While Americans continue to wonder when they’ll receive their second stimulus check, the Republican-filled Senate continues to argue over the details of their new stimulus package called The HEALS Act.

If you are wondering about how much a second stimulus check would be, the answer is that it would be roughly the same amount as the first stimulus check from the CARES Act, which was $1,200 for all qualifying Americans.

The new HEALS Act puts forth much more than a second stimulus check for 2020 and this is where much of the discord begins.

Much of the discontent content revolves around a ridiculous proposal within the HEALS Act to expand the FBI headquarters. Of course, this has nothing to do with the pandemic and is a shameless legislative attempt to piggyback on catastrophe. It’s understandable why even the Republicans are upset about this and that the HEALS Act is now on the brink of collapse.

And then we have the Democrats who are of course upset about the FBI headquarters but also about many other things in the proposal. The Democrats had put forth their own proposal known as the Heroes Act way back on May 15th, 2020. One item within the Heroes Act was to extend the current CARES Act unemployment benefits to qualifying Americans through January of 2021.

The new HEALS Act put forth by the Republican-led Senate proposes to reduce the unemployment benefits because they claim that people are choosing to not go back to work because they make more money from their unemployment check. The Republican plan eliminates the extra $600 per week and would instead subsidize just 70% of workers lost wages.

This is just one of the items that the predominantly Democratic Congress does not like. Read more here.

So what does this all mean for Americans who await their second stimulus payment?

It means you can currently only wait and hope.

The United States Senate calendar has them in session only through August 7th so hopefully they can enact a second stimulus bill before that date.