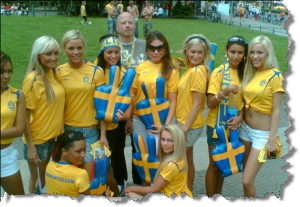 The first question that came to my mind was:  Is being like Sweden a bad thing?

I traveled to Sweden after college and saw nothing but good things, and I am not just referring to the Swedish female contingent.  The people there all seemed to live really well and be very happy.  Granted, I was there in the summer when it is light for 21 hours a day.  I have heard that the suicide rate in Sweden is very high, especially during the dark days of winter, but this list of countries with the highest suicide rate proves otherwise.

However, these are personal impressions and are probably slightly influenced by Ingrid, a story for another time.  The objective question on the table right now is:  Is Sweden a socialist Country?

Fox News obviously uses this term to mentally terrorize its viewers because Americans are trained to view all socialism as a bad thing.  When we hear the term socialism, we think redistribution of wealth and all of our hard earned dollars going to feed the unemployed drunk on the corner or the 20 year old bearing her fourth child.

As my research began, I first encountered a map of countries with the highest quality of life.   Look who shows up on the map:  Sweden.  Then, take a look who is not there.

If Sweden is socialist, then socialism, according to this map, produces a higher quality of life than capitalism.

Sweden is not a socialist country.  According to Wiki Answers, it is a “social democratic economy, with high, redistributive income tax and general welfare benefits.”

So, if Sweden is this bastion of capitalism, why isn’t everybody there on the world’s list of wealthiest people?   Well, in Sweden, the wealthiest of individuals pay as high as 60% in taxes.

In the article Where tax goes up to 60 per cent, and everybody’s happy paying it, we find that the Swedes incur the “second-highest tax burden in the world [yet] top almost every international barometer of successful societies.”

After viewing all of these graphs and charts about socialism and standards of living, it was a great pleasure to find Jon Stewarts response to Fox’s dreaded Socialist Sweden prognostications.

The Daily Show took matters into its own hands sending a reporter to Stockholm and produced this report:

The Stockholm Syndrome Pt. 1: The Daily Show Goes To Sweden

The Stockholm Syndrome Pt. 2: The Daily Show Goes To Sweden

Is Sweden A Socialist Country? Conclusion

As we look at this question of whether Sweden is a socialist country, the answer is basically no.

Today, socialism has evolved into many different forms all with different names (see Socialism on Wikipedia). At its core however, socialism mandated that the government–and thus the people–would own everything. Corporations and private businesses would not exist under pure socialism. And, as we have seen, corporations are thriving in Sweden.  Ever bought furniture at IKEA?

We have also seen in many reports that Sweden outranks nearly every other country in quality of life studies. This is no doubt due to the many social programs that have workers paying an average of nearly 50% in taxes.

As I mentioned earlier, Americans understandably don’t like seeing their hard earned dollars going to the drunk on the corner or the teenager having her fourth baby.

However, it’s not unreasonable to ask whether these two situations would ever exist in Sweden given that the drunk on the corner and the young mother would have had access to well-respected health and educational systems in the first place.

READ-ON: This report led to an interesting revelation about Income Equality and Standard of Living…