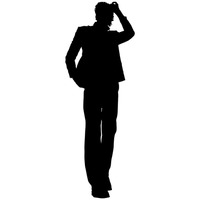 I am going to describe a man to you and I just want to know what your thoughts of him are.

This man is 38 years old, has a terrific job, and many friends.  On top of all that, he has an attractive loving wife who has faithfully been by his side for the last 11 years.  Together, they have recently decided to have their first baby together.

One morning, sensing that he is 38 and hasn’t really “lived”, he wakes, looks at his wife, and out of the blue tells her that he is leaving and wants out of their 11 year marriage without explanation, other than he needs to “live”.  He essentially leaves her crying with no answers and walks out the door.

What is the first thing that he does?  He gets a girlfriend, a young one, much younger that his wife, 14 years younger in fact.  After bedding her for about 6 months, he then decides that he wants to quit his job so he can travel to interesting places in the world.  He leaves the new young girlfriend and does not even tell his current wife (they have not yet divorced) that he is leaving.  In fact, since the day he walked out, he hasn’t bothered to call with a further explanation of why he left.

He heads off to Spain.  There, he begins to enjoy all the pleasures of his adventure.  He meets more young women, imbibes significant amounts of food and wine, and finds companions who are brothers in arms in this somewhat hedonistic approach to life.  Meanwhile, his wife and his girlfriend back home have heard nothing of him and continue to wallow in emotional pain while he wines, dines, and devours pleasure in Spain.

Then, he heads off to Tibet to find out what this “inner-peace” thing is all about.  Though he gives this a couple months, he realizes that “outer-peace” in the form of wine and women is much more appealing.

Given that, he heads off to the Pacific Islands to add some sun and sand to the equation.  There, he meets a girl from the mainland with curves in all the right places.  She pleases both his mind and body.

In the end, instead of returning home, he thinks, “This is not a bad place and she’s not a bad woman.  I’ll stay here.”

Back home, his wife eventually grants him a divorce, but without any explanation from him other than “I must live”, she has trouble going on with her life.

So, what do you think of this man?

This man is actually not a man, but a woman–the character of Julia Roberts in Eat, Pray, Love.

You can be critical of both, but you can’t empathize with her character and not the man above.