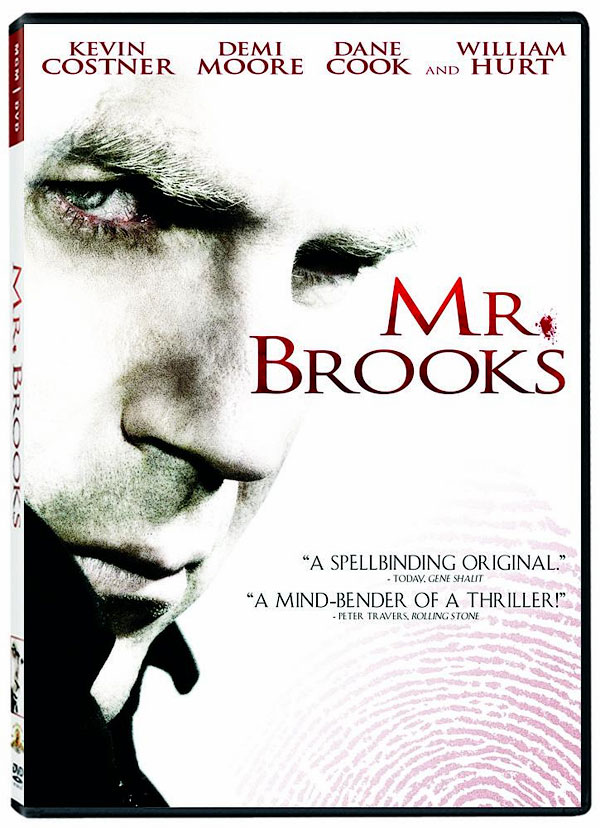 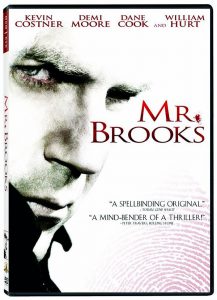 My friend “rented” the movie Mr. Brooks last night. The dance clubs were a-calling so we were only able to see the first 15 minutes. We will watch it later today.

I have seen the movie Mr. Brooks…and I haven’t.

I did see it. About 6 months ago, Mr. Brooks was one of the first movies that I saw when I arrived in Uruguay. They promoted it very differently here and made the movie seem much better than the promotion I had seen in the USA.

Mr. Brooks is one of those rare movies that has the same name in English as it does in Spanish. They did not even change the title to Señor Brooks.

I usually don’t like to see movies twice. When I was younger and wanted to see a movie again, my dad would say, “why, did you not understand it the first time?”

Good point. For some reason, movies are not like music: you typically don’t play it over and over again. You watch it once and your done.

Why is this? You might even think that it would be the reverse. There’s more in a movie. It’s 2 hours, not 4 minutes. It’s got visuals, a detailed plot, character development. An objective view would be that movies would be repeated more than music.

I thought of none of this as we popped in the DVD last night. The DVD menu appeared…in Russian; apparently, this was not rented at Blockbuster–downloading and ripping from the Internet is very popular and accepted here. It’s a money thing.

As we began the movie (downloaded from Russia, subtitled in Spanish, and spoken in English), I was excited because I really liked it the first time. I felt a little guilt, Why, did you not understand it the first time?, but not enough to not watch it.

Before we hit play, I wondered how I could enjoy this movie the second time knowing everything that happened in the movie. None of the plot twists and turns would be new to me. But then something happened. This something was nothing. My mind drew an absolute blank. I don’t know how I did this, but it happened in an instance. Bam! Memory of the movie gone! It’s like I just used that device from Eternal Sunshine of the Spotless Mind.

Other than the general plot outline that Mr. Brooks is a serial killer, I remembered nothing. And then, as the movie unfolded, I was one step ahead of the action. It was as if I was able to anticipate every scene right before it happened. It was as if I were…smart.

I don’t know where this ability comes from; this ability to intuit what happens next. But some people just seem to have it.. I remember many years ago seeing the movie Sex, Lies, and Videotape. I love this movie. In the end of the movie, Andie MacDowell’s character says to James Spader’s character, “I think it’s going to rain.” My dad, who I was watching the movie with, then said, “it is raining” right before James Spader’s character said the exact same thing.

Dad, I said, “how did you know that that line was coming?”

He just said, “It was obvious.”

How was it obvious? It wasn’t obvious to me. What am I missing? Did I not get that gene?

But now I know. I figured it out. When I am watching the movie later with my friend, I am going to say something like, “I think the daughter’s a killer too.”

And my friend will say with amazement, “How do you do that?”