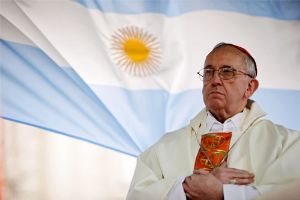 Cardinal Jorge Mario Bergoglio of Buenos Aires, Argentina has been selected as the new pope of the Catholic church.

South Americans and Latinos the world over can scarcely contain their excitement over the selection of Cardinal Jorge Mario Bergoglio of Buenos Aires, Argentina as the new pope. This is the first pope who originates from South America and the first from outside of Europe since the 8th century.

The new pope, a Jesuit, has chosen the moniker Francis after Saint Francis of Assisi. To learn more about the pope, we recommend you visit his rapidly growing Wikipedia page.

On a personal note, the selection of an Argentine, Jesuit pope has significance. I have lived for 5 years in South America, some of that time in Argentina and the rest in neighboring Uruguay, and I have an uncle who is a Jesuit priest.

I spoke to my uncle yesterday and we talked of the role of the Catholic church (and the pope) in modern life. While many suggest that the Catholic church needs to update its teachings and preachings to adapt to the modern world, others claim that this would be forsaking the foundation of Catholic ideologies.

It was a great discussion and the general conclusion was this: While the Catholic church cannot abandon ideas and principles, it can adapt a better response by acknowledging, rather than reprimanding, human fallibility.

I have been around Jesuits priests my entire life as my Uncle and his friends would make weekly visits to our house. These were the most fun and highly educated people I had the good fortune to meet in my youth. They were unlike other priests, as they did not make you feel guilty for your mistakes. Instead, they somehow got you to question your actions.

With all the negativity in the press about priests (even by some of my favorite thinkers like Bill Maher), it hurt to see so many great people that I have met maligned. This prompted me to write the article Priests: Presumed Guilty.

So, I personally am upbeat that the Catholic church has selected a Jesuit as their pope. From my experience, Jesuits seek to educate rather than admonish.

And the fact that Cardinal Jorge Mario Bergoglio hails from Buenos Aires, Argentina? This emboldens me further. If decadence and depravity were planning a trip, they might just forgo Las Vegas for Buenos Aires.

A priest who has resided in Buenos Aires for a lifetime (or even a week!) knows of human fallibility firsthand. One day in Buenos Aires, as I curiously looked upon two buildings, a native of Buenos Aires said to me: “It’s true. This is where Saints and Sinners walk hand in hand.”

The two buildings were a Cathedral and brothel, right next to one another.

My conclusion: I think our new pope Cardinal Jorge Mario Bergoglio of Argentina is a great choice. He will be an understanding man who seeks to educate and forgive rather than admonish and punish. The Catholic church needs someone like this.

After publishing this article, I have heard from some of those I am close to in South America who are disenchanted with the selection of Cardinal Jorge Mario Bergoglio of Argentina because of his reported involvement with the military dictatorship during Argentina’s “dirty war”.

This was a terrible time for many countries in South America as dictatorships spread in the region throughout the 70’s and 80’s. Equally as atrocious was the U.S. support of these dictators, a still relatively unknown fact and one that I have written about often.