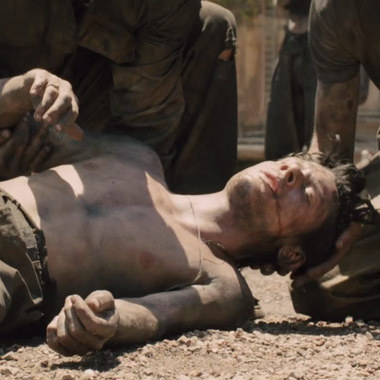 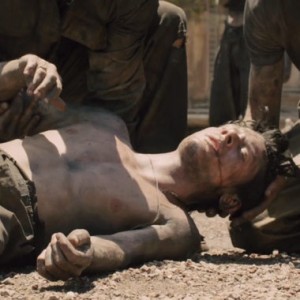 In this Unbroken review, I’ll  tell you why this is a torturous movie that may leave you broken.

There are various predispositions and expectations one has when they enter a movie. Have you seen lots of previews? Do you adore or respect one or many of the actors? Do know what the movie is about before walking in the theater? These pre-sentiments can have a vital impact on what you will think of the final result.

In the case of Unbroken, I knew practically nothing about the film prior to entering the theater. I only had vague notions that this was a movie made by Angelina Jolie about (I thought) some sort of great American hero who triumphs against all odds (see trailer below).

***The FOLLOWING MAY CONTAIN SPOILERS IF YOU HAVE NOT SEEN IT***

Then, the movie begins and, for a brief time, my preconceived notions are confirmed. In the main character, Louis “Louie” Zamperini, we discover a rambunctious young boy, an Italian immigrant in America, who is always up to no good and feels that he is unworthy of being great. His older brother intervenes, however, and teaches Louie that he is special and can do great things. With his older brother’s help and inspiration, Louie builds his character and his physique to become an aspiring Olympic track star; he is chosen to represent America in the Olympics in Germany in 1936, where he will earn a 3rd place metal, and in Japan in 1940.

Then life and war intervene to derail Louie’s life path and, in my opinion, the movie. He enlists in the military and is commissioned as a bombardier in the Pacific Islands during World War II. Great, I thought, I am usually intrigued by movies about World War II with their stories of battles, heroism, and redemption.

Except, there were very few war battles, not enough heroism, and precious little redemption.

After the buildup in the beginning where we see Louie’s ascent (about 15 minutes of the almost 2 1/2 hour movie), here is what happens: Plane battle in the sky with the Japanese where some die but Louie survives; sent on a rescue mission where plane crashes in the ocean; many people die and Louie survives with 2 others; two of the three, one being Louie of course, survive on a life-boat for nearly 2 months, overcoming all sorts of lost-at-sea deathtraps (this seems to take up at least 45 minutes of the movie…I started looking at my watch at this point–never a good sign); then, they are picked up by Japanese military men, spend time in a captive hole, and are tortured for information. Finally, Louis is transferred to a military prison where he is tortured for the rest of the movie.

As I watched, the word sadist came to mind. This movie seemed to made for people who like to watch 2 hours of pure, human torture.

The movie is marketed as a “triumph of the human spirit” kind of story. In spite of all this torture, Louie survives and remains Unbroken. I didn’t leave the movie feeling that way at all. The main thing Louie did was not die.

There is an element of heroism in not dying. But the title of this movie-Unbroken, is certainly misleading. Louie and his cohorts are completely broken. We see that in the “account” of Louie after the war as he suffers from PTSD and alcoholism.

Many years after the war, Louie’s life does take a drastic turn for the better which you can read about on WikiPedia here.

But the movie does not comprise any of Louie’s post-war life.

The movie, Unbroken, is simply 2 hours of human torture that may leave you feeling, well, somewhat Broken.

Unbroken: Reviews from Around the Web

It’s only fair that I leave you with some other reviews from around the web of Unbroken. I realize that my perspective, though always the most insightful, is not the only one 🙂

‘Unbroken’ review: Angelina Jolie tortures her audience with scene after bloody scene: The title says it all in this review of Unbroken from The Oregonian.

‘Unbroken’ Reviews: Angelina Jolie’s Star Jack O’Connell Gets More Critical Praise Than She Does: This review praises the lead, Jack O’Connell. I would agree that the acting in the movie deserves more praise than the movie.

“Unbroken” review: Angelina Jolie’s uneven second effort: Mike Lasalle of SFGate says: “One of these days, Angelina Jolie might very well direct a great movie. She has a rare talent and intense concerns and interests. But first she is going to have to suppress some self-defeating impulses that have now twice taken potentially effective films and rendered them ridiculous” and he also questions whether director Angelina Jolie may have some sort of sadomasochistic obsession.

Here is the official trailer of Unbroken, which I feel misleads the audience into believing that they will get a story of heroism and redemption rather than 2 hours of torture.