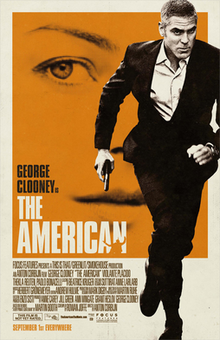 The American, starring George Clooney, had the appearance of a great thriller.  They marketed this picture as a Bourne Identity type of movie.  Substitute George Clooney for Matt Damon and watch the thriller unfold.  Right?  Wrong!

Imagine that Jason Bourne has to lay low for awhile and is instructed to head up to a small village and talk to nobody.  Now, you have to watch him do basically nothing for two hours.  Kicking ass and taking names in this small village?  No.  Just sitting there in an apartment making a gun.

That’s it.  That’s the American with George Clooney.  This movie has less dialogue than a silent picture.

The dictionary defines the word “plodding” as moving “heavily or slowly”.  This movie is plodding.

It’s not a horrible movie if you know what you’re getting, a genuine portrayal of someone who is trying to remain hidden.  Do you know what people do when they are trying to hide?  Exactly.  Nothing.

When a man is instructed to do nothing, he still must do the one something.  Thus, our main character Jack (George Clooney) repeatedly visits a brothel.  There, we meet the woman who sidetracks us from the drudgery of this movie, Clara played by an Italian actress named Violante Placido.  Her smile and charisma give this movie a little something out of the nothingness.

Also, as in Eat Pray Love, the main character in this movie is unsympathetic.  In the first scene of the movie, he shoots an innocent girl (one who was also his lover) in the back of the head because she saw his profession up close.  This episode is what causes him to go into hiding in the first place.

So, why would you see a movie about an unappealing character who does nothing for two hours?  Well, it’s a real movie.

You could also go to your local laundromat and watch someone you might not like wash clothes for two hours.  That’s real too and less than the price of a movie ticket!