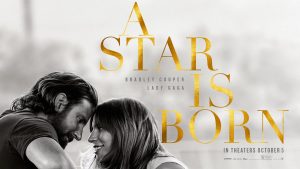 In a Star is Born, we have the actor Bradley Cooper playing a singer and the singer Lady Gaga acting.  Did this role reversal work?  Were they able to pull off a great movie?  Read on to find out!

First, a disclaimer:  I’m not impartial — I am a huge fan of both Lady Gaga and Bradley Cooper.  I’ve always respected Lady Gaga’s independent spirit and enjoyed her music.  And, Bradley Cooper  has an equally interesting backstory.    Did you know he speaks fluent French and wanted to be Ninja?

And then, I watched the preview for the movie, and BOOM – there’s Dave Chappelle acting.  A singer, an actor, a comedian?  All my favorites!  What’s not to love?  I’m so in.

But, viewer beware, high expectations are often the death knell for a movie.  Even if it’s good, you’re disappointed as you expected great.

I went to see A Star is Born the first day I could.

So what did I think?

Expectations did not disappoint.  Obviously – duh!, I loved it…but with caveats, which I’ll get into right now in the more detailed review of the movie.

A Star is Born:  The More Detailed Review

As I get into some of the specifics, those who have not seen the movie may want to stay away as it may contain spoilers.

A Star is Born is a story of life before, during, and after fame.  And, in spite of the bill of goods we are always sold in our meager circumstances, the life before fame compares very favorably.

We first meet our two stars as one is before fame and other is during fame.

Ally, the character of Lady Gaga, is a waitress who is an aspiring singer in her off-waitress-time.  Her voice shines as she sings some French Cabaret number in her first scene.  There, she meets a drunk Jack (Bradley Cooper), who stumbles into the tranny cabaret looking for booze after he has just played to a sold out stadium.

What, you ask?   Bradley Cooper was singing.  I think he was…and if it was him, his singing voice was raspy, soothing, evocative, and somewhat transcendent.  But was it him?  Here’s the deal.

Of course, Jack hears Ally sing and we’re off.  He sets her on the path to stardom, they find love, and all goes well until it doesn’t.

We often hear that life is a journey.  On a journey we go from place to place.  We’re in between.  Perhaps  that’s where true happiness exists:  in the spaces between the before, during, and after.  This was what Ally was experiencing – the path from before to during.  And Jack put her on this path and found his own new path with her.

But Jack can’t escape his demons of booze and pills.  He has temporary stretches of success but, as Ally’S fame transforms her, both figuratively and literally, to other places, Jack reverts to his vices.

Ally tries to help him.  His best friend George, played inspirationally by Dave Chappelle, does his best.  Even the brother he was long at odds with tries to help.

But, in an inebriated life-escape, Jack hangs himself in his garage while he was supposed to be Ally’s guest singer at her huge LA show.

This is the caveat referenced above – I did not so much like the movie after this point.  I suppose it’s real —  I’ve seen enough of VH1’s Behind the Music to not know this.

But I thought the character of Jack was better, more real, more down to earth and less susceptible to the vagaries of the entertainment industry.