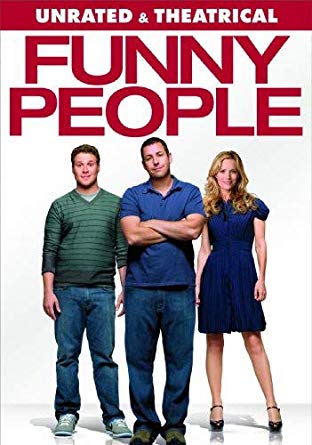 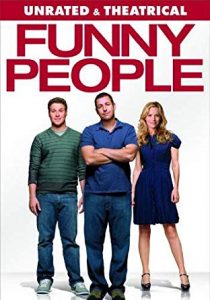 Last night, I watched the movie Funny People with Adam Sandler and many other great young comedians.

20 years ago, you knew what to expect with an Adam Sandler movie; now you don’t.  I like that.

20 years ago, all was simply slapstick and often very funny.  Now, we still get slapstick but with serious, and sometimes slightly demented, undertones.  It is often said that great comedians and great comedy comes from the darkest of places where the only means of survival is through comedy.  In the recent career of Adam Sandler, he seems more comfortable exposing some of those dark places.

The seriousness in Funny People occurs immediately as the character of Adam Sandler, a famous comedian named George Simmons, is diagnosed with a deadly form of leukemia.  With this diagnosis, George suddenly realizes how pitifully lonely his rich life is.

To contrast George’s wealth and success, we then meet three young comedians, all living together, who aspire to reach the heights of George Simmons.  These guys, played by Seth Rogan, Johah Hill, and Jason Schwartzman, are funny people and their interchanges add a lot to the movie.

The least successful of the three, Ira Wright (Seth Rogan), is hired by George Simmons to be his personal assistant, confidant, baby-sitter, and best friend after a chance meeting at the local comedy club.  Thus begins the adventures of George and Ira, who are the principle funny people throughout the movie.

George, after being diagnosed with the probability of death, realizes that, in spite of all his wealth, his life is one of material possessions, immediate gratification, and misery.    He has no real friends, no love in his life, and not much time to live.  He seeks to rectify all of this by reacquainting himself with his family, friends, and the “love of his life” that he let get away, who is now married to a man named Clarke (played brilliantly and humorously by Eric Bana).  He needs to do all of this quickly, before he dies.

Ira, the new assistant, is there with a front row seat to George’s transformation; Ira serves as both employee and paid companion of George, who at once seeks advice from Ira yet scolds him when the advice does not meet well with him.

Of course, all does not go smoothly as both sadness and hilarity ensue.

Overtime, through self-realization and Ira’s assistance, George comes to see what his life should have been, instead of what it was.  George apologizes to all for being a distant, unemotional, pleasure seeker who did not give those closet to him the love that they deserved.  He tries to change, to make his life right, before the leukemia kills him.

All of these new revelations are quickly challenged when George learns that his experimental leukemia medication is working…he is among the 8% who will survive the diagnosis.

Will he lead a new life according to what he has learned or revert to the lascivious George of old?

You’ll have to watch to find.  In the end, you’ll find Funny People addresses deadly serious topics but has a humorous edge that you’ll definitely enjoy!